We all think differently....

...and crafting is a good example!


Edit: If you came here from WOYWW 123, I'm sorry, I added the wrong link - you should be here instead - signed, Mrs Potato Head.
On Thursday I spent a jolly craft afternoon round at a friend's, doing 'show and tell' and swopping stash. She's really into decoupage (the biggest word I can think of for today) so I took a lot of House Mouse decoupage sheets for her along with some other bits and bobs. Then she produced a load of stamps asking if I'd like any of them. Quite a few were not really our style (she bought a job lot at the local charity shop) but one in particular caught my eye. 'I'm never going to colour that parcel' said Pauline - but I could see potential. I was honest and explained that I'd use it for paper piecing just in case she might still want it - at which the stamp was still dropped into my bag by Pauline :) Funny, she does amazing decoupage work but baulked at the thought of paper piecing!

This is what I came up with - one of the fastest cards I've made for a while: 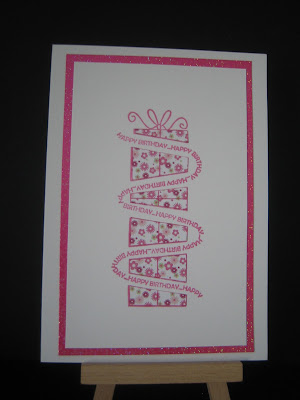 Without my specs on I'd actually thought the message was Happy Christmas until I got it out to have a play here. But, it's a very simple Birthday card instead :)

So, I'm quite early this week to enter this into Jules Crafty Snippets Challenge - Week 39.


I used:
- White A6 card stock
- pink slightly glittered background layer card from snippets
- image stamped using using the 'third-hand' un-named Anita's stamp and a pink teeny ink pad from 'I know not where', but I have a load of these little square beauties,   :)
- paper pieced using paper with teensy flowers on, from snippets