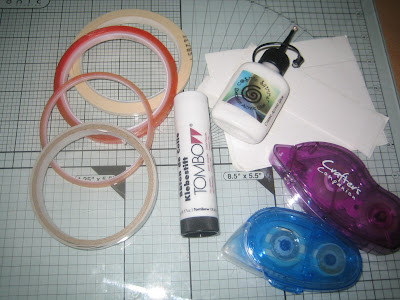 Of course, I meant the Poliflora, but, for some reason, I could not leave a comment here earlier. Glad the talc worked so well. I have a huge baby powder in front of my desk at all times. It is also brilliant if you get a little sticky bit somewhere you cannot get it off. A little powder rubbed in deals with the problem. Thank you for your lovely comments. xx Maggie

Yikes! That is going to affect my scrapbooking and painting!! Better stock up! And Coffee!
Thanks for the tip off!
xx

I guess you've turned the comments back on! This was too funny, Di, but you really could have caused entire stock markets to collapse all over the world, thereby collapsing the entire world economy!! I mean, when you think about it, doesn't glue hold just about EVERYTHING together in one form or another!

Was there drinking involved here? This is diabolical and I'm so proud to call you my friend.

But I may as well point out the obvious (as I'm sure my playmates have already done!): you know we are all going to remember this forever and throw it right in your face if you try and discipline any of us on the Playground for some little infraction. NO ONE will ever be able to top this!!

And, finally, since I totally missed it the first time round, where is your subscriber button? Hmmm? xxoo Darnell

LOL! I may have to stock up on adhesives just because. Actually I learned it is a bad thing to stock up on some adhesives--they lose their will to live when they age. I had a good laugh at your April Fool's post. I just read an article on cat gender reassignment surgery for transgender cats which made me thing, "Oh, boy, what is this world coming to?" Then I got wise and checked the date of the post. Yep, April 1st.