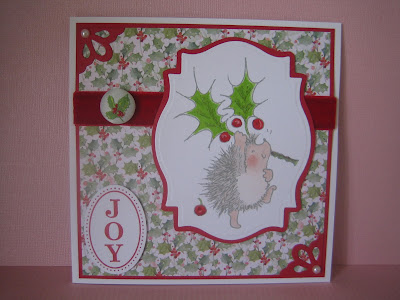 So sweet, love it,
hugs Tamara

Gorgeous card, Di - looks as if that stamp is another one to go on my wishlist - I do love PB stamps and you've used this one so beautifully - thanks for entering both of my CHNC challenges - hope to see you again soon. x

Love this cute Hedgie image Di. Gorgeous festive card you've made with it too.

Thanks for joining in with Rudolph Day again.

Congrats to Diane on winning your prize.

Lovely card and congrats to Diane in winning the die.

Gorgeous card there Di. Such a cute image.
Well done Diane on the win. I hope you have great fun with it! Mine does get a fair bit of use.
Hugs
xx

Such a sweet little hedgehog, and your sentiment goes with it perfectly. lovely backing paper too.
Jean x

Gorgeous card, Di, and I can quite see why the stamp was on your wish list - it's cute. And I can also see why you wanted to use that brad so much, it's perfect with that paper. Congratulations to the other Diane - even if she did give Len a confusing moment :) Hugs, Elizabeth xx

I can see why that cute little hedgehog was on your wish list! Nice Christmas card!!!

Congrats to Diane for winning the die!

Hi Di, this is a gorgeous card! Super cute hoggie too. If you let me know where you are struggling with the H20's I'll try to help you, if you want. I attended a class in Kettering when they first came out and I've been using them so long that I've learnt a few tricks over the years Karen x

COngrats to Diane!
That cute little hedgie is sporting some mighty big thorns on that holly! Better be careful handling that stuff! LOL Great card!

What a sweet Christmas card - the image is so cute, and your papers are gorgeous!!

Congratulations on your win over at Penny Black Saturday .. .. you have spent your prize wisely I see!!! A great card.

Well done too to Diane for winning your birdcage die. I invested in that about three weeks ago and love it.

How'd I miss this one then. Congrats on your win much deserved me thinks. hugs Mrs A.

Awwww...He is such a little sweetie! Good on you for finding some holly paper to go with!