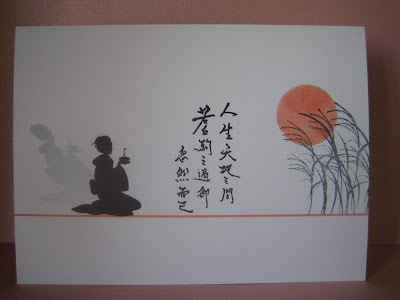 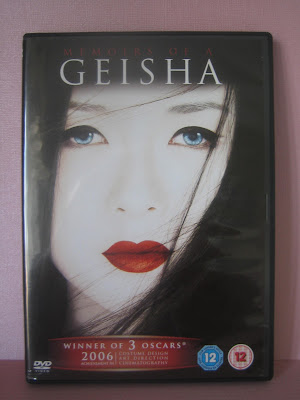 Oh dear, I hope Houdini turns up on time! How infuriating it is when they don't arrive! We do pay their salaries after all.

What a fab card! I guessed 'Mulan' (a favourite) but 'Memories of a Geisha is also a fab film!

This is gorgeous - I don't know how you did it but your creation is absolutely beautiful. I loved the book too!
Sandy

Lovely card. Not seen the film but loved the book. I have a sneaky feeling that I've got those stamps and never used them! Must be time to get them out.

Perfect absolutley perfect. Yes I did give it the correct guess but I have not read the book or watched the film. Ok I will have to do it, I can hear you telling me "you must watch it" LOL. Maybe I will snuggle up with Yoda and watch it with him LOL

Super card Di, and I'm impressed you are so good at translating Japanese!!!
Jo x

That card is brilliant Di. Have been having a look back at previous posts I've missed - some lovely work. The fan is amazing. Thanks for popping by my blog. Trying to catch up with everyone and everything- serves me right for sneaking off to sunnier climes. Anne x

"Bery" clever Di and did guess the film if a brain freeze would not remember the name!! :D

PS meant to say trust the great Houdini arrives sooner rather than later too - hor'ibble damp and drafty otherwise... xxShaz

That's a fab card with Geisha... But I think it would work just as well without her! I've never seen the film but have read the book...an interesting read.
The pretend Radley is widely available...I bought mine in Salisbury...it's by Clarke & Clarke fabrics. They have fab designs, I love them all!! But I'm not going to buy any more....good LLJ !
Looking forward to the 29th :)
LLJ 37 xxxx

I also loved Memoires of a Geisha - film and book, but particularly the book.

Lovely card and I love that film too! I may just have to put that on my Wish List at a certain online DVD retailer - there being no place to get DVDs locally!!
I have some of those stamps too, and in fact I put my four sets of Asian stamps into DVD style boxes only this week, having tidied.....yes tidied my stamps into alpha order!! Don't feint now!
Hugs
xx

Lovely asian card! I missed you at Ally Pally too - Sam told me you are somewhere around - I was looking but I didn't see you anywhere! I hope you had a good time, hopefully I will see you at the crop!
Lots of hugs,
Cardarian

Not seen the film Di but your card is wonderful and my hubby would love it, he likes anything Japanese.

We have a leaky dishwasher and washing machine at the mo and if l've got soggy socks once this week.....grrrr!

Hope everything gets sorted soon :)

I absolutely love this card to bits. That shaddow is a perfect touch. Only film I could come up with was 'Shanghai' (2010).

Your Geisha card is so clever and beautifully executed, Di! Chips all round, LOL!!

I'm so sorry to hear that you are still waiting on repairs! I must say you are keeping a better humor about than I would be!!

Well, I did guess the movie correctly. Now about the card--beautiful! I too loved the shadow and immediately wondered how you did it. Clip art?!! Cheater, cheater, pumpkin eater! Naw, just kidding. All is fair in love and war and ART!

great film di! and i love your card!

Thanks for joining us this week
Jen
"Less Is More"

Ooooooh this is luverly! Such a serene image - love it!

Oh gosh Di, this is so gorgeous!
I also love the shadow...and the grasses against the red moon are brilliant.
This is an all round beautiful card!

Ohw, what a great card! I love it! Seen the movie and it's great to see your card.

I'm sorry this is such a late visit, but I have been cruising on the Rhine for a week and have just got back.
It's a super card
Thanks so much
Chrissie
"Less is More"

Liking this a lot!! Hugs Juls