Just a quick post to wish you all a VERY happy Christmas, despite the mess we're all trying to cope with.

Speaking of mess, on Tuesday Len spotted Dudley race upstairs - looking decidedly naughty. He followed him and caught him on our bed chewing an offcut of wood he'd picked up very quietly from the garage where Len had been working. We think he was about to try and hide it in the bed - little tinker

It's almost impossible to get a photo of him these days as he just fidgets as soon as you get the camera out. This is the best Len could do: 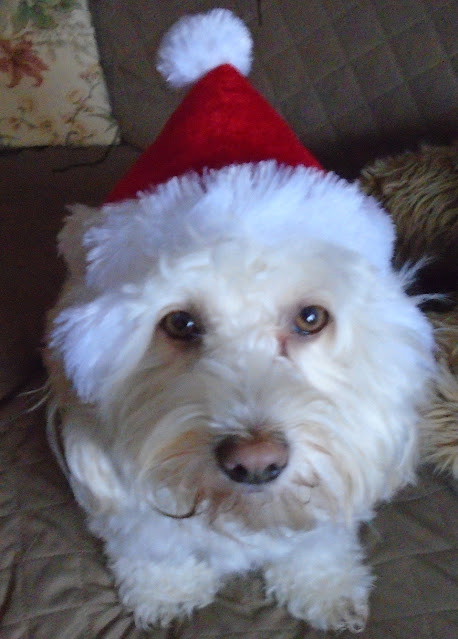 His lovely pale peach ears are hidden by the false 'beard' on the hat to keep it on for at least 30 seconds and his nose is his Winter 'snow nose' which happens each year so isn't unusual. Despite my daily care, once he hit two years old he does have a bit of discolouration around his mouth and under his eyes. He'd just had a huge drink of water before this was taken so his beard is wet which makes it look more pronounced.

But, he's still our beautiful boy and is such a joy, if anything with more character. During the run up to Christmas he's been  into absolutely anything and everything. We can't move without him trotting along to check out what's going on!

He also doesn't look too thrilled about 'doggie sized Santa hat' but if you look closely just below the middle of his nose, there's a little smile lurking as if he just knows it's his duty to act up!

Stay safe, enjoy Christmas Day and I'll be back ASAP!