I love how many rainbow products are around for card making just now, and what lovely results people are producing. I think a lot of it was kicked off by the hope that shines from a rainbow after the rain - much as we're all hoping will happen with COVID before too long.

I fell in love with a set of edging dies made by Whimsy, then just had to have their 'Rainbows' paper pack to make this card: 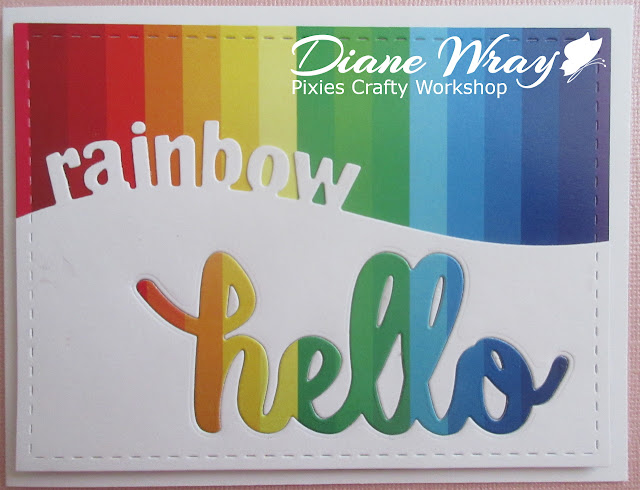 - then used a snippet of white card to die cut the 'rainbow' word curve - it comes  in a set of two dies by Whimsy called 'Rainbow Word Border dies'. The other die has the word 'color' on it - USA spelling

- after that I placed the 'hello' word die I wanted to use onto the curved piece of white card, to make sure I left enough space - then die cut the bottom edge and sides using the same Lil' Inkers 'Stitched Rectangle' die

- held the curved piece of white card in place on the bottom of the 'rainbow' rectangle with low tack tape and then die cut the word 'hello' through both layers, using a 'Large Hello' die made by Frantic Stamper. That way I could be 100% sure that everything would line up nicely

Finished! The rainbow paper pack is absolutely gorgeous, even though I was so desperate to get my hands on it I ordered it from Simon Says Stamp as it was nowhere to be found here in the UK and who knows when stockists will have stuff available these days.

Lining up the word 'hello' to match up with the 'rainbow' stripes properly added a little bit of work but I think well worth it. I can see me repeating this design a few times as it's so cheerful!

I'm entering this card into Darnell's NBUS Challenge #17 as much of what I used was unused. Both of the dies and of course the paper pack were NBUS.

Dudley is fully recovered from his grooming session, he woke up as bright as a button on Sunday morning. And, as it's cooler now, he's sleeping upstairs a lot more at night time.

Fun and games here after the heavy rains we had last week.. First of all there was the flooding but then something must have burst in the sewage system and the flood waters changed somewhat. Some poor people had a river of the nasty stuff flowing through their gardens. Being selfish, I was so thankful we were OK and not in the direction of the flow!