Hooray, Dudley has returned to snuggling up with us during the night. It's a mix of cooler weather and also most likely the fact that he had a hair cut so is feeling generally cooler!
Nothing exciting to report from this end, each day is very similar with the odd 'absolutely necessary' outing thrown in. The most stressful outings were on Thursday, following Len to the car dealer/garage as they aren't currently collecting cars for servicing, bringing him home and then doing the same process in reverse later on in the day. The driving itself was fine - it was the 'pesky passenger' in the back of my car, safely in his booster seat, causing the mayhem that was the real issue! Who knew that a fairly little dog could make such a variety of sounds, chuffing like a steam train, yodeling for England - and almost imitating a chattering parrot in between. All done at full volume and it mattered not whether Len was in the car with me or not. The one time Dudley IS quiet is when I zip along at high speed - but at roundabouts, traffic lights and in built up areas where I poodle along he lets rip! He's always the same and it's doubtful if he'll ever grow out of it to be honest - little tinker. Later we discovered that the car's Sat Nav software hadn't been updated as it should have been, as part of the service (grump, grump), so we have to go through the whole garage 'to and fro' process once again on Monday - happy days!

Anyhow, here's my snippets card for this fortnight: 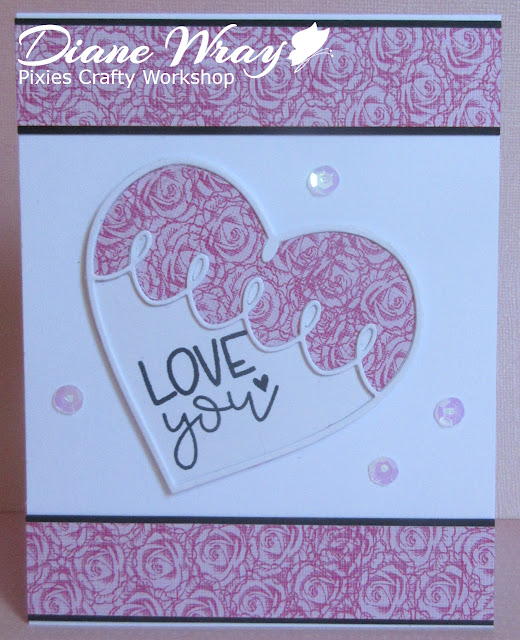 
- 5.5" x 4.25" white card blank, tent style
- snippet of white card as a plain backing for the heart, which I die cut using a Memory Box die called 'Cupid Heart'
- another snippet of white card, die cut using a Memory Box 'Cream Puff Heart' die - in fact I die cut two of these in the end, just why is a bit further down
- snippet of 'pink roses' card from a Wild Rose Studio 'Butterfly Garden' paper pad which came free with 'Quick Cards Made Easy' magazine' ages ago - die cut using the same Memory Box 'Cream Puff Heart' die
- at that point I glued the 'cream puff heart' white frame onto the white plain heart
- then I added the pink roses top part of the heart - in the process damaging part of the white frame, due to sticky paws, sigh
- rather than begin all over, I die cut the second 'frame' from white card (I did mention above that I cut two and that's why!) and glued it in place - success!
- the sentiment almost tripped me up as well. I had a set of love sentiment stamps by Avery Elle called 'And then' - and so wanted to use one for this card - in the white space on the heart. Only one would fit - sideways!
- however, I stamped the sentiment using Memento 'Tuxedo Black' ink and the Misti - and phew, it worked

- then cut snippety strips of black card and topped them with strips of more of the pink rose snippets before adding them to just a smidgen away from the top and bottom of the card front, with an overhang

I did learn a few things along the way whilst assembling the heart. Most importantly, make sure your paws aren't sticky. The other thing is that I die cut the plain white heart using a Memory Box 'Cupid Heart' die - because I already had it from years ago (2014 to be exact). I can't find it here in the UK to buy, but I could easily have drawn around the outside of the 'Cream Puff Heart' die and fussy cut it instead, making sure I was a very tiny bit inside the heart shaped guideline I'd drawn. The 'cream puff heart' actually looks very nice just left open with no infilling to be honest.

And of course, here's the prize for this fortnight: 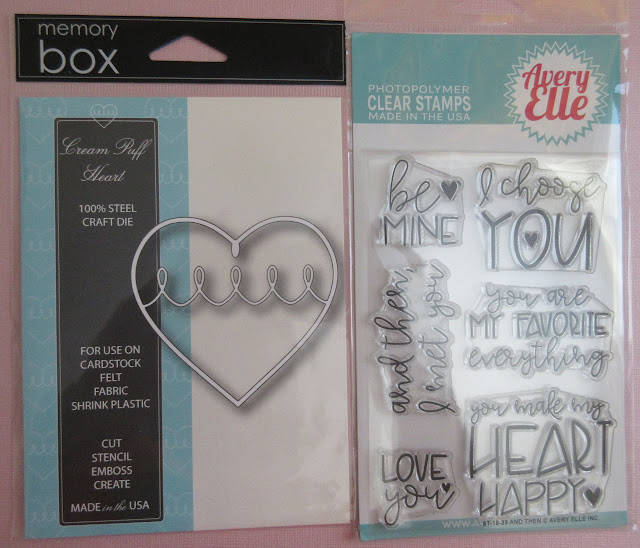 It's a Memory Box 'Cream Puff Heart' die and an Avery Elle 'And then' set of sentiment stamps. Lots of lovely and quite unusual sentiments in this set.
As always, the Snippets Challenge will run for two weeks and the Playground gates will close at 11am UK time on Saturday 5th September. The gates will open again at midnight UK time on the same day.


Remember, if you link into the Playground and don't say clearly that you want to be in the draw in a comment on here, then you will be bypassed if your name comes out of Mr Linky. I'm sure you all know I ask for a positive 'yes' on the blog post itself - just in case you're only playing for fun - otherwise I don't add you to my little list.
As I used the 'Cream Puff Heart' die and also the Avery Elle set of sentiment stamps for the first time, it means I can join in with Darnell's NBUS #17 challenge HERE!
And, remember it's August's Rudolph Days Challenge over at ScrappyMo's - running from Tuesday 25th to the end of the month.
Stay safe my lovely friends.