And it's another Rudolph Days challenge over at ScrappyMo's - where did the past month disappear to then? Time certainly flies these days. 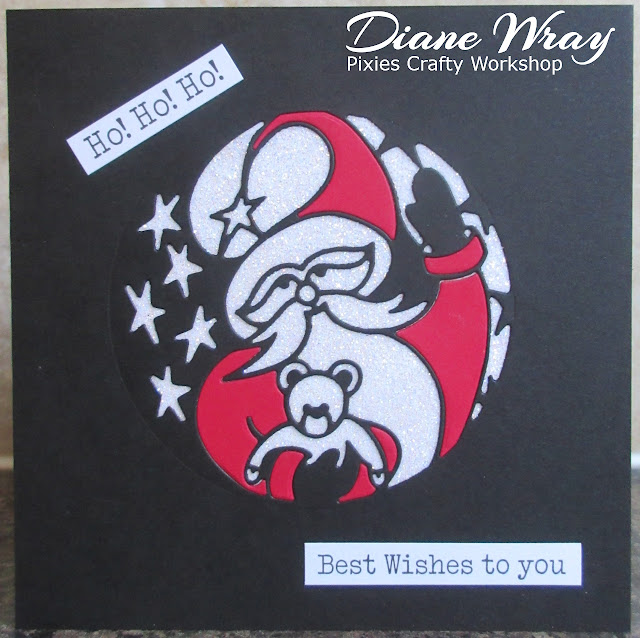 - then cut the die once again, from SU's 'Real Red' card stock this time

- popped seven of the red pieces in place, as shown on the above card

- then sprinkled iridescent glitter (cheap and from a local shop but Glamour Dust would work well) over the aperture, whisking away the excess with an Avon blusher brush (bought solely for the purpose of crafting)

Nope, I'll never learn - I made 12 all the same and almost lost the will to live.
One of the trickiest cards to 'batch bake' for sure!

Wish you could see the sparkle, but when I turned the card to catch the light I lost the sentiment printing, sigh.

A little tip, once you add the red insert die cuts, try to 'nudge' the black outlines against the red insert to avoid a bit of white showing. A little point but worth trying to remember - she says, too late! And anyhow, who uses a magnifying glass to check out their Christmas cards?!

Edit: Thanks to Kath for a great idea - when adding inset die cut pieces to a white background with the image outline part in black - just run a black pen around the inside of the aperture you're going to fill!

By the way, this is a direct result of seeing a blog post very recently (literally a couple of days after our Cornwall holiday) on Barbara Gray's Clarity Stamps blog - she has lots of photos of the process, which will probably make more sense than all my words.

I have to say though, I did have some issues with the die itself - Santa's face has a lot of little pieces that should drop out as waste - they did but only after I added extra shims to that part of the die and even poked a bit with a craft knife, in addition to the metal shim I was already using anyhow.

It didn't matter on the red die cuts, as the outer part of the die cut fine and the pieces I wanted to use were also bigger of course - although I still needed the metal shim for my Cuttlebug.

Just a little warning if you do decide to dive in - but not enough to put you off as it's such a fun and rather funky die.I suspect that my Cuttlebug might be a tad out in the calibration to be honest.

I got the die and the sentiments stickers on a special Clarity Stamps offer BTW. 8 A5 sheets four are black on white and four are white on black. And, half of them are for Christmas and the others are for general use - bargain!

I think they might well last me for the rest of my days :).

Merry Christmas - it's looming whether we like it or not!