It only seems yesterday that Mia was a baby and now she's heading into her 13th year, so is on the verge of being a teenager!

When we came home from Cornwall I had to really get cracking and make her card in time for it to reach Germany. Luckily, I already had a new die waiting to be used - so I kept the card fairly simple: 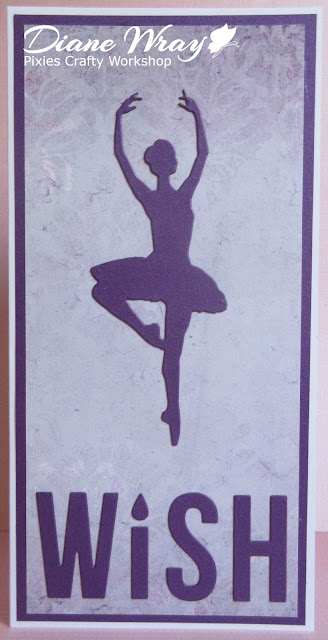 - piece of shimmery plummy purple thin card stock as the 'frame', which I glued onto the card front

- piece of patterned paper from a LOTV pad called 'Timeless Victorian', trimmed and then glued onto the purple layer

- because I hadn't used really intricate dies they cut well, despite the sticky layer in between the thin pieces of card

- then added the word WISH using a glue pen, followed by the faerie (fairy) minus the wings which are cut separately anyhow

The reason I chose to make the fairy into a ballerina was partly as I'd seen it  elsewhere on a blog, probably one of yours so thank you if it was you! And, Mia is also a very good little ballet dancer.

Edit: I spotted the die on Gail's blog - here's a link to the post that inspired me!

Phew, I hate making cards in a rush but for once nothing went wrong! I deliberately didn't add Mia's name and age, the girls are both growing up and from the age of 10 onwards I try not to add those extra details unless it's a special birthday or occasion.

Happy Birthday Mia, hope you're having a lovely day!

And, we finally have Dudley booked into a new grooming place for next week. His Auntie Stephanie has had to go back to Kent to care for her Mum, and our local branch still doesn't do scissoring. We just might have hit lucky, and his new groomer, called Debbie, already knows and grooms/trims Havanese! I attached photos and she says 'He's a stunning little chap'. Bless him. Way to go Dudley ... my most loved and so sweet little man! After Len of course :) x