Today it's Len's Birthday, not 'a milestone one' but he's clocking up the mileage as they say - albeit just two years ahead of me anyhow :)

Again, the day after we came home from Cornwall, I locked myself in the craft room in a flat panic when I should have been 'doing wash loads'. I made a card for Len from me (see Sunday's Snippets post), a card for Mia in Germany and also this card - from little Dudley to his 'Dad' for his Birthday: 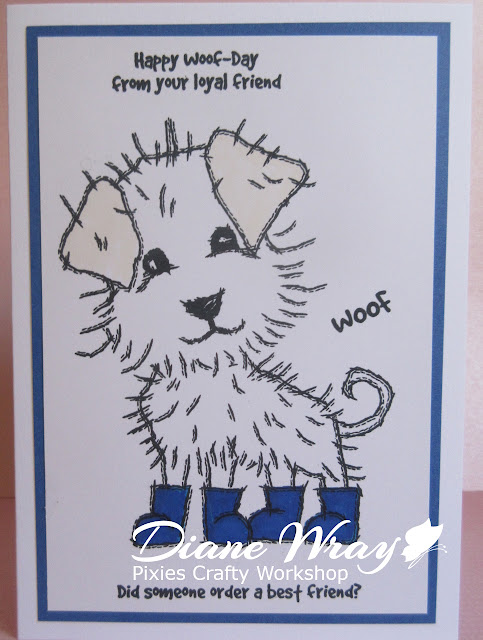 - then stamped the image and words onto a piece of white card using a really cute Woodware set of stamps called 'Puppy Boots', the Misti and Memento 'Tuxedo Black' ink

- thankfully, with Dudley being mostly white, I just needed to colour his boots/wellies with blue Pro markers to match the blue card I'd chosen to use for the 'frame' layer - along with a little touch of champagne/peach colour for his ears

- topped the frame with the image panel and there we were - all done!

You might think the pooch is a bit skinny looking compared to Dudley - but when he's wet he doesn't look all that different to the image - apart from the wellies!

I did add an insert, along the lines of 'Next time remember to get me some wellies too'. A reference to the image, which turned out to be SO apt, and the fact that Len was fine trotting around our little Cornish garden in front of the cottage in his wellies - but poor ole Dudley had to be toweled, rubbed and wiped dry most of the time. The morning dew, and what spasmodic rain we had, meant that 'rarely' did he escape a 'good ole toweling down'! Often it was before he was even allowed to poke his nose inside the cottage, poor little scrap. He's so funny, at one point he truly did look like the 'ET image in the bicycle', with his head wrapped in a towel.

But, as I said already, he totally loved the different outlook and the sheep, the sheep! We did laugh one evening when we knew he was indoors with us but we couldn't find him - and there wasn't that far to search either. So we left him and were on the sofa, idly chatting with the TV on after dinner. Eventually the floor length curtains began to move as this little lump shuffled along. He was behind the curtains, against the huge floor length window/doors - looking longingly at the field where the small flock of sheep were. Either that or he was stargazing?

Oh what a wonderful card my buddy could do with them boots he has a sore foot and all this rain isn't helping. Hope Len had a awesome day.

Happy Birthday to Len, Di! I do hope you both had fun celebrating. Your Dudley card is adorable. xoxo

Well I'm sure that Len just loved his card from Dudley and I can just imagine how funny it was to see those curtains in the cottage bumping along with Dudley as he kept an eye on the sheep! Happy Birthday to Len!

What a fabulous card from Dudley to Dad - love your Dudley stories, and today's was a beaut, Di.
Blessings
Maxine

Woodware must have produced this stamp just for Dudley - it is great and I'm sure Len will love his cards. Hope he has a lovely day. Strange that we've both produced cards with dogs in wellies this week!! Great minds think alike as they say.

A fabulous cute card and I'm sure Len loves it too.
Kath x

Love the card Di, The dog image is lovely xx

What a fantastic card Di, I love the wellies.

This must have made Len smile as it is the perfect card from the lovely cuddly Dudley. Well done to you Di for finding this very apt and fun image and for making a super card with it. x

Hi Di this is a lovely card that doggy is so cute in his boots. Take care. Hugs Jackie

What a perfect card for Dudley to give to Len!! Love that adorable dog stamp! Now I want a pair of royal blue wellies (my black ones are so boring!).

Perfect card for Len and a lvoely story.

What spoilsports you are for NOT playing hide & seek with Dudley . . . He told me he counted well past 100 and waited and waited for you to find him, got bored so had to give his hiding place away!

Aww too sweet Di, it's a perfect image, love his little blue boots. I hope Len has a fabulous birthday, Kate x

Happy Birthday to LEN and this card makes me smile!!! A fun Dudley copy with lovely blue boots for rain, adorable! Surely your hubby has loved it so much!!

I bet Len's heart melted when he opened this sweet card!

We have french doors with full length curtains in our living room and Eva is often to be found behind the curtains gazing out into the garden. Heaven only knows what's going on out there (although I'm reasonably certain it's not a flock of sheep!)

Sweet! And a very happy birthday to Len!
Marianne x

Happy belated birthday to Len. This card from Dudley is just perfect.... and wellies for Dudley seem to be great idea! ;-) xx

What a perfect card for the occasion - such an adorable little doggy and those much needed wellies!

What a fun card with the doggy wearing those blue boots! LOL Love it, and a very happy belated birthday to Len - I hope it was a good one!

This is soooooo cute! I hope Len had a fab birthday! Hugs xxxxx

a Very sweet card! It's your Dudley! How cute and clever for the "Dad" to get his cool card!