I did post on Thursday, apologising for not being on top of commenting, due to the fact we've been down to Cornwall for a relaxing week in a cottage right on the edge of Bodmin Moor, very close to the Cheesewring for those of you who might know the area. I'll add more further down this post, including a video of Dudley - if I can get it to upload!

Another bit of an apology, a bit of bad planning on my part means we have another (albeit different)  'underwater' scene for my snippets card and prize again. It's Len's Birthday this coming Tuesday and the day after we got home I shut myself in the craft room to make a card from me, as well as one from Dudley (which will appear later). And my card is this fortnight's snippets offering: 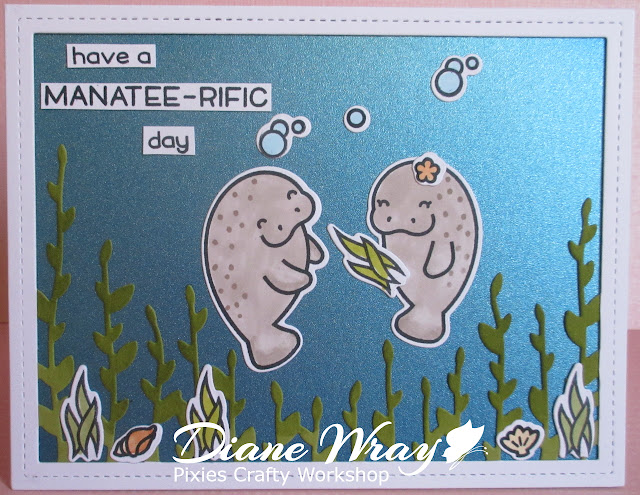 - I had a snippet of Tim Holtz 'Sparkle' card inked with shades of turquoise, handily lying on my desk so I trimmed it to size as the background and stuck it onto the card front using Collall All Purpose Glue

- next used a snippet of white card onto which I stamped the manatees, bubbles, a few other little elements and also the sentiment words I chose - using Memento 'Tuxedo Black' ink and of course the Misti. They all came from the Lawn Fawn 'Manatee-rific' set of stamps, which I've had for ages with Len's Birthday in mind

- coloured them using Pro markers, then die cut them using the matching set of dies and just cut the sentiment strips freehand - popped them into a little plastic dish for safekeeping as I'm a dab hand at losing small dies and die cuts these days

- then die cut the main frame with the 'sea grass' using the biggest die from Lawn Fawn's 'Bayou Backdrop' set of dies and a snippet of green card. In reality, the 'sea grass' is supposed to hang down from the top of the frame like overhanging trees over water, as in a bayou - I've written a little bit below about how this idea came about as I did have some inspiration with the idea of adding an extra touch of green shading to the 'sea grass' using a sponge dauber and an 'Old Olive' SU ink pad before removing the die cut from the piece of green card

- then, using the same source of inspiration, I die cut the same frame again from a snippet of white card and carefully snipped the 'sea grass' away from the frame leaving just a white, rectangular, stitched frame, which I glued onto the green frame

- glued the whole frame onto the card front

- then added the manatees and other elements using a glue pen

And that was Len's card all done, in the nick of time. And here's why I chose to make this card. A good few years ago we went to Sentosa island, just off Singapore, to visit Underwater World and were totally entranced by a 'dugong', which is a close relative of the manatee - not the same but still a close relative. She was one of the gentlest creatures I've ever seen, called Gracie, and we both fell in love with her - Len especially. I've written here about him swimming with a sea otter in Thailand. She had been rescued as a baby when her mother was sadly drowned after being tangled in fishing nets off Singapore and lived for a good few years in Underwater World where she was so loved and well cared for. Much as it's not usually right to keep any wild creature in captivity, IMHO, Gracie wouldn't have survived if she'd been released back into the wild without her Mum to guide her.

I used both the boy and the girl manatees on Len's card - the girl is supposed to be offering some 'greens' to her chap, and it'll probably make him smile.

As I said, I'd had the Manatee stamps and dies for ages and whilst half asleep in the early hours one morning, suddenly remembered I'd seen a Lawn Fawn die (the 'Bayou Backdrop'), which I then thought could be flipped and used as sea grass. Imagine my surprise when a bit of Googling turned up a card almost identical to what I had in mind - someone had beaten me to the idea, and even used the manatees stamps and dies! That blogger turned out to be a lady in the UK called Laura and she has a great blog! She's full of ideas and also has tons of useful videos as well - you can reach her blog HERE. And also see how similar my card is to hers HERE. Huge thanks Laura for the inspiration for the little extra touches I hadn't thought of. I did end up with a fairly close CASE of Laura's card, but have already been in touch - and of course this won't go into a challenge. And Laura was lucky enough to swim with manatees in the wild - what an experience that must have been.

The prize this fortnight is a bit of a bumper one: 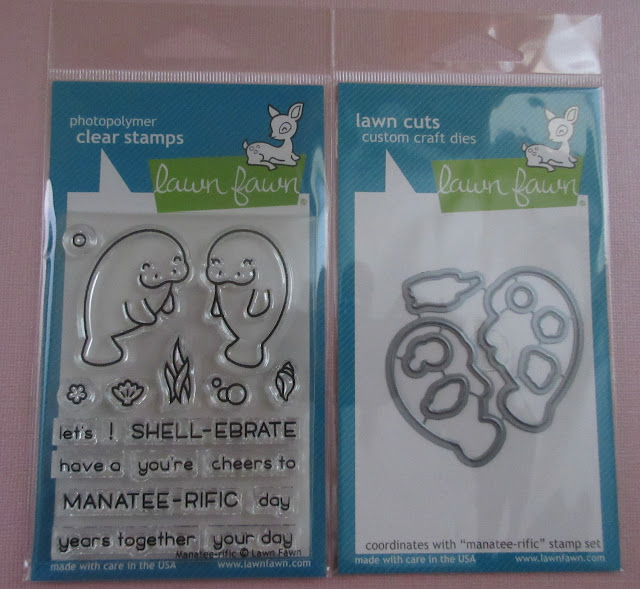 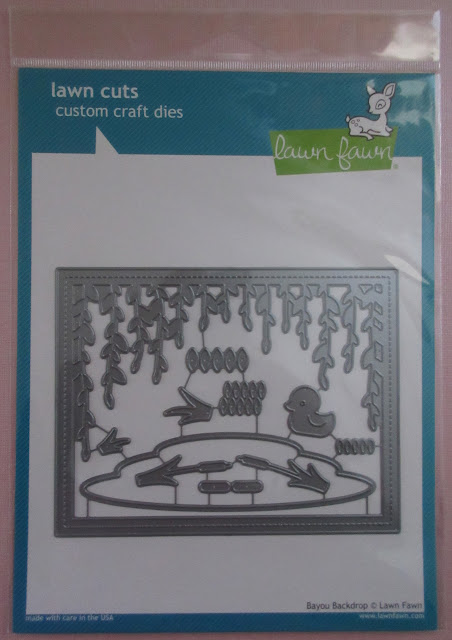 A Lawn Fawn 'Manatee-rific' set of stamps with matching dies - plus a Lawn Fawn 'Bayou Backdrop' set of dies - on this occasion I will split the prize - the 'Manatee-rific' stamps and dies as one part and the 'Bayou Backdrop' as the other part. However, the whole bundle can be won as one prize if you prefer that. Just say so in a comment - and please feel free to play for the whole bundle as they do compliment one another so well. Love that the manatee set can be used for so many occasions by switching the sentiments around.


As always, the Snippets Challenge will run for two weeks and the Playground gates will close at 11am UK time on Saturday 26th October. The gates will open again at midnight UK time on the same day.

And a little more about our week in Cornwall. The cottage was (as we already knew) quite 'compact', solid granite and also warm and cosy - it was a converted piggery and we'd seen the conversion being started about 14 years ago when we stayed in a different cottage at the same farm.  We were high up on the edge of Bodmin Moor (abut 300 metres high) and could usually see for miles across the valley. The cottage was very privately situated with a fenced in garden so we could let Dudley have a good old romp around. Len still kept a very close eye on him, the drop at the far end of the garden was around 20 feet, had Dudley managed to wriggle his way out. We were also very conscious that he had to be kept away from any long grass as, during our Advantix scare, we'd shampooed the area along his back where it had been applied - leaving him potentially vulnerable.

So, there's a little video clip below which I really hope you can see. I took the video using my Canon camera, standing just outside the panoramic sliding doors at the front of the cottage. You can hear the radio playing in the background if you turn the sound up - also some noise being made by Len and Dudley :)  Len was keeping Dudley on the move and away from any long grass at the edges. AND, for his grand finale, Dudley decided to sign off by crouching to have a wee - before trotting a little bit further and doing a little encore! He's never, ever lifted his leg when going to the toilet - and it's very endearing. He always turns around and looks a bit surprised to see what's going on as well, silly dog! He was fascinated by the sheep in the field below needless to say.

I'm so glad you finally get to see Dudley in 'play zoomies' mode!


If you have any problem viewing then here's the URL which will take you to YouTube - had to upload it there before being able to embed it into the blog. What a palaver, I take my hat off to folk who add videos to their blogs on a regular basis! If it works then I do have more footage, perhaps for next week, which pans around showing the distant tin mine shafts etc as well as more 'zoomies'.

And finally, we were fast asleep but I have permission from Lyn and John (the owners) to add their photo of the sunrise we would have seen from the cottage garden. It was taken one morning from their farmhouse .............. whilst we three were still giving it the big Zzzzzzzzzzzzzzzzzzzzzz's!!