I know, it's now August, but Mo has had to delay the July Rudolph Days Challenge - so it should now run from 1st to 7th August.

And it gave me some much needed time to come up with my entry this time around. Tracey of Dies to Die For was at a Copics event with a 'pop-up shop' - so it really would have been very rude not to buy something of course :)

Amongst my (ahem) haul there was a lovely little set of stamps with various sentiments, some Christmas gifts/parcels and three sweet little deer. So, not being one to do things the easy way, I stamped eight of each of the three deer and the same with the little Christmas parcels. I then happily coloured them whenever the mood was right. And then it was time to cut them all out - sheesh, I KNEW I ought to have bought the matching dies. In fairness Tracey didn't have any left so I took a close look at the dies on line as well as some die cut images on cards, which I found as examples on line. Ha, I can do that 'she said'. So far I've cut out all the little (18 that I stamped and 24  coloured)parcels and just ten of the deer as they really are a bit tricky-wool. I still have slight reservations about images which are die cut leaving a white border right round - it's almost the 'norm.' now and all I can think is that it allows for a little bit of 'play' when you're doing the die cutting.

So, I used one design of deer and one design of gift/parcel to make my entry for Mo's challenge - times eight of course, in an attempt to boost my flagging Christmas card target for this year: 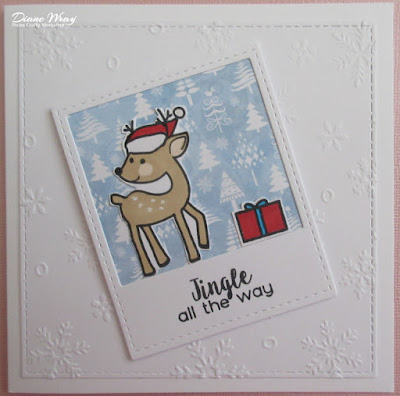 - in fairness, as I said, the little deer and parcel were both already coloured and cut out. I'd used Memento 'Tuxedo Black' ink and a couple of stamps from The Greeting Farm's 'Dashing' stamp set - and the Misti of course! Do be aware that MFT have stamps and matching dies also called 'Dashing' so if you like my little fella be careful to order the right one from the right company!

- I'd then coloured the little deer with Pro markers, as well as the parcel. I also added a few little white dots to his back (using a Signo white pen) just to add some interest as I hadn't done any fancy shading and it broke up the expanse of his back (as well as looking cute of course). Also added clear Wink of Stella to the fur and bobble on his little hat for a little bit of glisten

- so there I was, with a little deer and a Christmas gift/parcel and absolutely no idea what to do next - so I walked away and had a think for a day or two

- ping! Then it just hit me - he needed to be framed (obviously) with some form of background, so this is what I did

- die cut a Lil' Inker 'Instant Camera' frame from white card stock then stamped the sentiment 'Jingle all the way' using the Misti, Memento 'Tuxedo Black' ink and one of the sentiments from the 'Dashing' stamp set

- I backed the aperture in the frame with a snippet of pale blue patterned paper I found tucked in the back of the LOTV 'Frosty Christmas' paper pad. I found six in fact, obviously left from a previous play, and also a further two with snowflakes on (I do prefer the little trees though for this particular card). Backing this frame can be a bit tricky and I find that the very narrow red line tape works a treat if you're careful as it's unforgiving if you make a mistake

- then cut a square of white card stock just about quarter of an inch smaller all round than the card front, using a die from The Works 'Stitched Squares' set of dies

- glued the embossed panel to the card front

And, it's still slim enough to post at our standard letter rate - result!

And now to carry on with the other 16 little deer and 16 parcels - sometimes I start things and really don't think it through just how long it'll take. But, I won't be beaten - even if it's a couple of weeks until I tackle them!