And just where did THAT two weeks disappear to then? Crumbs, time flies when you're having fun!

The 'Scratch Pad' crazy cat snippets card last time proved to be a hit - and lots of you played along for the prize as well - the result of the draw will be published a week from now.

Lets get straight on with my snippets card - get out the paper hats and streamers: 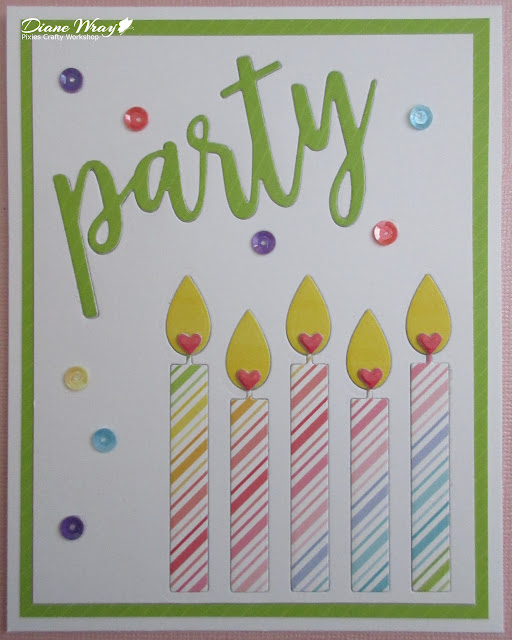 - a whole sheet ...... shudder ...... (which I then trimmed down) of green paper from the fabulous Lawn Fawn 'Really Rainbow' paper pack

- a snippet of white card, a bit smaller than the green layer - and an assortment of small snippets from the halved envelope which I'd stuck into the back of the same Lawn Fawn paper pack to save snippets in - I find this system works well for me as you can easily find co-ordinating scraps of paper from the same pack all kept together

- big breath next as the next step was to die cut the word 'party' into the white background, using an MFT 'Party' die - I cut it at an angle (confess time here) mostly as I truly didn't see any way of me getting it looking straight! And, squeal, it worked!

- so, I had the background of apertures (kept in a little plastic lid) ready to use and then just used more double sided adhesive (Stick-It Double sided sheet this time - and yes, more little snippets) to back the apertures cut into the white panel and then added the die cut candles and flames, as well as the word 'party'

- at this point I went and had a little lay down to recover - even though things were rolling along smoothly I was waiting for a problem - as you do!

- went for yet another lay down and sobbed gently

- solution, trim the flippin' top edge off the embossed piece of white die cuts layer and also trim the card and backing panel slightly - one reason never to assemble a card until the end!

These are brilliant dies to use and can be for invitations or equally for a Birthday card. The party die would be good for the likes of New Year and other celebrations as well.

I like to add a few sequins to plain cards now and then if they just look too bare and I discovered Lucy Adams a while back and just love her sequins and shaker mixes. She sells from her own on line shop in the UK HERE where I buy from - and Simon Says Stamp in the US also stocks her mixes HERE. One word of warning - the selection really is huge with loads of themes and delicious colour mixes, so if you do go and peek, then please don't blame me if you end up spending a good few pennies!

And of course, here's this week's Snippets Playground prize: 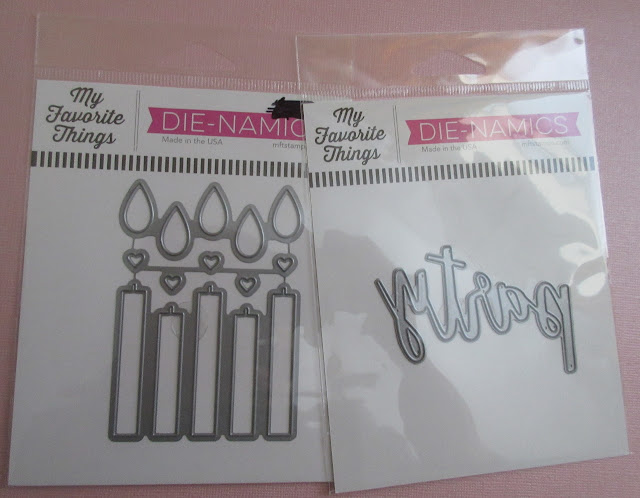 It's your own MFT 'Birthday Candles' set of dies and a 'Party' die as well. I won't be splitting the prize BTW. If you win and truly don't want to keep part of your prize then, as I've said before, feel free to pass it onto a crafting friend - but I do think they make a great pair!

As always, the Snippets Challenge will run for two weeks and the Playground gates will close at 11am UK time on Saturday 1st September. The gates will open again at midnight UK time on the same day.

It's been a rough week for both of us here - we seem to be kicking colds and other bugs around between us, first one of us is unwell and then within days the other one goes down with the same thing. Today (Saturday) is the best I've felt for almost a week and of course crafting has taken a bit of a back seat, apart from my snippets card!

Love from Parsnip (he's wearing a surgical mask to avoid catching anything!) and of course from me,