Here we are again, ready for another fresh Snippets Challenge - anything goes so long as you use one or more 'snippets/scraps'.

Least said about the continuing heatwave the better really - but we'll surely pay for it later on in the year due to cattle needing their Winter feed already and the lack of rainfall also affecting crops.

My snippets card for this week is still here on my desk as it really makes me smile. In fairness, I'd seen this idea with the torn top pieces a good while ago - and my  memory was jolted when I spotted a very similar set of stamps and also a sample card. The stamps were at the Dies to Die For pop-up shop the other week and maybe that's where I spotted the sample card, or it could have been on line last week when I was browsing. Anyhow, here's my snippets card - and I defy you not to smile: 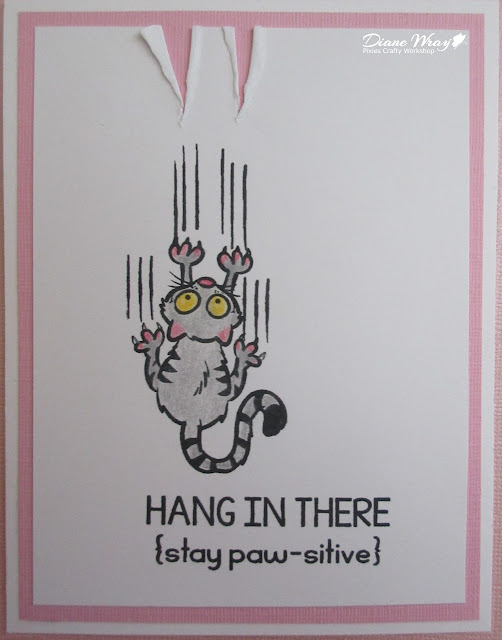 - a snippet of pink card from the snippets folder, which was almost the right size but I held off trimming it right down until I'd made the image panel

- a snippet of white card, bigger than I would need for the eventual size

- stamped the cat, claw scratches and also the sentiment using Memento 'Tuxedo Black' ink and stamps from the delightful Your Next Stamp 'Scratch Pad' set of stamps

- heart in mouth lest I wrecked the thing, it was time to do the little 'rips'. I used a water brush to just moisten a couple of lines down the card, above the claw marks and carefully tore down the lines before folding each side back - took me back to my mulberry paper tearing days!

Oh what fun this stamp set is and this particular card isn't the only fun design of course. It was so quick and easy to make, with minimal colouring needed, and purrfect for a cat lover of course. Or anyone needing a bit of a laugh or cheering up. When you turn the card upside down, the expression on the cat's face is priceless!

AND, it qualifies for the current Less Is More Challenge #377, which is 'Pets' - yippee, I love to play over there :) There might be a bit too much on the card, but I hope not as I still see plenty of white space and it really was such a joy to make. A few stamps, little bit of colouring. a couple of rips/tears and some layering. Oddly enough, one of the DT has a card using the torn paper idea - I made this last week well before the new challenge appeared though. 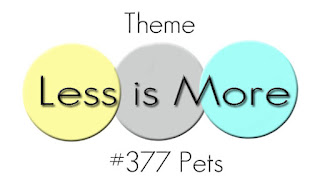 And of course, here's this week's Snippets Playground prize: 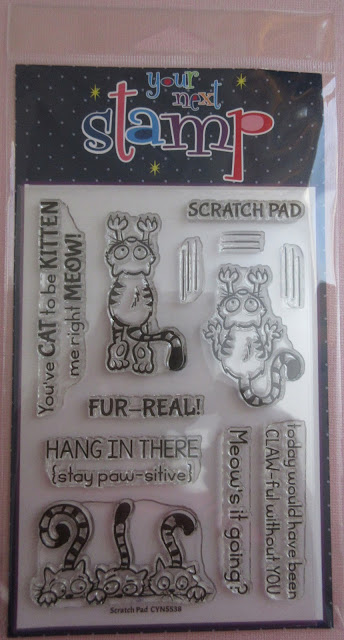 It's a Your Next Stamp 'Scratch Pad' set of stamps, same as mine. We had a doggie set of stamps recently so I figured it was time for some feline friends to take centre stage and also be a prize.

As always, the Snippets Challenge will run for two weeks and the Playground gates will close at 11am UK time on Saturday 18th August. The gates will open again at midnight UK time on the same day.

Be sure to call back next week to see the fortnight's picks and the winner of the MFT 'Cross Stitch Tag' die set. Not as many entries so far this fortnight but who can blame people with the heat, holidays and also cross stitch isn't everyone's idea of spending time crafting. But it's lovely to see so many people still entering just for fun.

Hedgies are still doing fine it seems (still eating and drinking every night) and the other wildlife here is much the same as ever. The birds are very grateful for fresh supplies of water twice a day - thankfully we had a bit of rain about a week ago which filled up the water butts. That will keep the bird baths going for a while. One hint, blackbirds absolutely adore apple cores - but better than that, they go crazy over an apple cut in half and laid face up on the grass (I buy the 'less than perfect' ones from Ocado. I think it's the juicy fruit pulp they love. Some evenings we'll go out to sit in the garden and there will be a blackbird pointedly kicking around the empty shells of both halves of an apple - waiting for fresh supplies! Perhaps they're secret cider drinkers ☺☺☺