Crumbs, Rudolph Day came around quick, after the previous one being at the beginning of August! Quick, hop over to ScrappyMo's HERE if you want to join in!

My mojo is still off on his Summer holidays and I was stumped for ideas. It's not for the want of Christmas card making stuff to use - just a totally blank mind!

The Playground toy box is quite healthy ready for the annual Christmas/New Year prize draw but I want to try and avoid making (or at least publishing) any snippets cards using my own duplicates as that's all part of the fun - I hope! I have a feeling I will be making some Christmas cards and perhaps publishing them ahead of time but not saying if the items I've used are going to be on offer until we hit Christmas and New Year time in the Playground - me bad!

In the end I rootled through my box of shop bought Christmas cards we've been sent in recent years - saved with up cycling in mind. And I came across a card with three sweet little painted robins wearing hats and a scarf on (bless them) - and I ended up CASE-ing one of my own cards of September 2016 so there's more than a touch of déjà vu here!

I was only saying in an email to a blogging friend at the weekend how I never seem to use a lot of stuff more than once - and then I go and almost replicate a previous card, how weird is that then? In fairness, I made three cards last time as I chopped up a card with nine little robins on - just made the one card this time though: 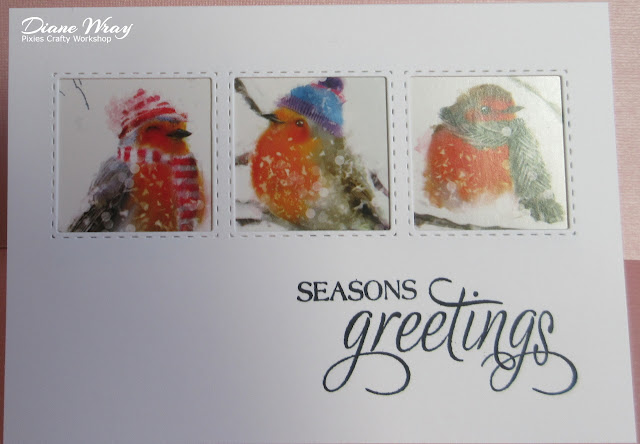 - 4" x 5.75" off white card blank, tent style. Pure and really crisp white wouldn't have looked right against the snowy backgrounds and luckily I had some card blank with the slightest tinge of 'creaminess' - which of course the camera has bleached anyhow!

- backed the inside of the card with a slightly smaller piece of the same off white shade of card stock using red line tape - finished!

Drat though, the original card was printed on high gloss paper and try as I might I just couldn't take a photo without some bounce-back of light!

It didn't take all that long to make and, with luck, I'll return to that box of cards to up cycle again - like a couple of dozen times at least as am woefully behind on my Christmas cards target!