Just a couple of weeks after big sister Mia's 10th Birthday Len's little grand daughter Olivia is eight today. I look on both the girls as if they were my own grand children and they in turn call me GranDi - which is so sweet.

Livi's main loves are horses and football (as well as dragons and dinosaurs) so I kept away from anything too girlie but still picked a really cute LOTV digital image to make this card: 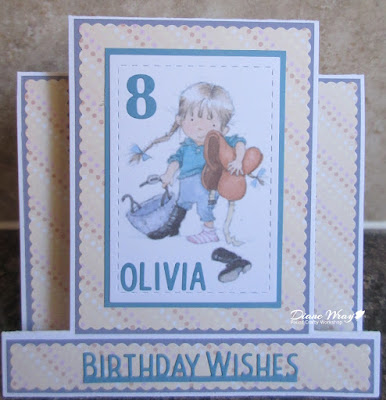 - A4 white card stock, cut to 6" width but left full length so it would go through the Cuttlebug

- Presscut die set called 'Step Card Cutting' - firstly to cut the main body of the card. I don't have extended plates for the Cuttlebug  but whenever I use this die I tape the main cutting die in place on the card stock with removable sticky tape then after cutting one half just move the uncut card and die (which is still in place) up between the plates and then cut that part

- added the panels to the card front

- the image is a LOTV pre-coloured digital image called 'Annabel - Saddle Up', printed onto card and then die cut using a die from the Lil'Inkers 'Stitched Rectangles' set

- silly me had already stuck the bottom patterned strip onto the card front. Rather than rish wrecking the card front by trying to use the Cuttlebug to impress the lettering used a curved 'burnishing' tool to make the sentiment stick firmly (little fingers love to pick at things!)

- finally, I used a shaped die which comes with the set to add more patterned paper inside, topped with a scalloped white panel to write on

The diagonally patterned paper was a bit tricky to juggle with but I got a pretty good pattern match in the end.

Hope you have a fabulous day Livi! Big hugs from Grandad and GranDi - all the way to Germany.