Oh good grief, one month today Christmas Day will have been and gone. Mind you, I love the days following Christmas when there are plenty of leftovers to nibble at, repeats galore on TV (not so exciting) and finally we can relax.

Remember, from yesterday it's 'Rudolph Days' challenge over at ScrappyMo's, so this is my entry for November. You have until the end of the month to join in - loads of us from the Playground play over there so you'll find quite a few familiar friends.

My card today was such fun to make and used up lots of little LOTV snippets: 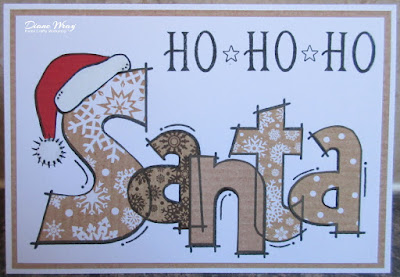 - a piece of plain 'Kraft' paper from the LOTV paper pad called 'Krafty Christmas' as a backing for the white layer, cut slightly smaller than the card front and glued in place. Then set the card aside whilst I worked on the image layer

- piece of white card for the image and sentiment, cut slightly smaller than the Kraft layer

- I left the Santa stamp in place and stamped once again, onto plain white paper this time and I'll explain why in the next step

- now I had the stamp still sitting on the lid as well as a stamped image held in place in the base of the Misti. This meant I could position my little snippets for the individual letters easily, one at a time and making sure that each letter in turn on that piece of white paper I just stamped on was completely covered

- at this point I stamped the sentiment 'Ho Ho Ho' using the Misti again. It's always good to do as much stamping as possible before adding a lot of work (paper piecing in this case) to a card that might be ruined if you have a 'mis-stamp'

- btw I stamped the 'Ho Ho Ho' sentiment onto the image panel using the same ink pad and an unbranded stamp bought from eBay (more about the lovely seller below folks!). The sentiment comes with twirls at either end but I masked them off so the 'Ho's' would fit

- now I had the five letters ready to fussy cut - they all came from the LOTV 'Krafty Christmas' pad (stored in the back of the pad in an envelope 'pocket'). The hat was from a little snippet of red paper tucked away in the back of LOTV's 'Merry and Bright' paper pad and the fur trim and pom pom were stamped onto white card

- fussy cut all the pieces and have two little tips. I used a small SU round punch to punch out the white pom pom and also used the same punch to cut the pom pom away from the bottom of the hat on the snippet of red paper so the curves would match up

- the other tip is something I learned a good while ago through trial and error. See the centre of those 'a's'? It's so much easier to use a small hole punch (1/8th") to punch out the centre and then cut the rest away - in fact I also did that where the letter 'a's' curled over. Much easier for access and certainly less likely to fail than using a poky tool to start it off

- then ran a black Whispers brush ended marker round all the fussy cut letters - it adds definition, hides the white edges of the paper ......... and also disguises where you may have trimmed too much off 😉

- lastly, added a coating of clear Wink of Stella for a little bit of sparkle to the hat trimming and pom pom

One final tip about these Woodware huge letter stamps is, if you're paper piecing them (although coloured markers would be fun, as well as easier), lay the papers you want to use side by side and shuffle them round to get as best a balance as possible. And if you forget how the letters are 'stacked' then either check back here or Google for an image - they're placed in the following order on my card: S,first a, t, n and the last a - then the hat finished off with the trim and pom pom.

And here's some low-down on the 'Ho Ho Ho' set of stamps. All my 'Ho' stamps were quite small (in fact the Woodware stamp set comes with a little 'triple Ho' which I've used separately elsewhere). But - I wanted a 'triple Ho' as more of a statement and after Googling I found a lovely set of stamps on eBay. The seller (a lady called Liz who is here in the UK) is a delight to deal with, super fast service and she has a lovely selection of goodies in her eBay shop - which is HERE.

Let's move onto this fortnight's prize: 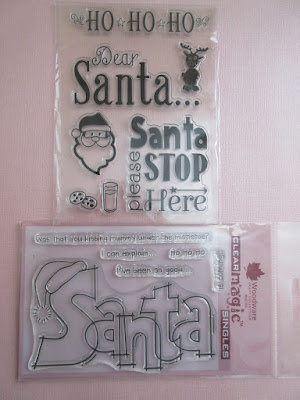 Yup, it's a Woodware 'Huge Santa' stamp set as well as an unbranded 'Ho Ho Ho' stamp set (I was so pleased with the sentiment being bolder and bigger than others I've seen that I had to run back and buy a set for the Playground).

As always, the Snippets Challenge will run for two weeks and the Playground gates will close at 11am UK time on Saturday 9th December. The gates will open again at midnight UK time on the same day.

It's a maximum of ONE entry and please say in a comment if you wish to play and be a possible winner of the prize. As I already said, the prize is as above and I will happily split the stamps sets, in which case I'd do further draws for the other item. Please also link back to the Playground in your blog post to be eligible for the draw.

Be sure to call back next week to see the winner of last fortnight's prize which is a Sugar Peas 'Nativity-Scape' die and a Paper Smooches 'Christmas Sampler' set of sentiment stamps, another lovely Guest Designer and my picks from the past two weeks.