Panic truly was setting in a couple of weeks ago when we hit November and my Christmas card count was lagging behind. So, I set to and made seven cards in one 'batch bake', each one the same.

Shame on me, in the couple of years since I bought this fun stamp set (pre-loved), I've only ever used it the once: 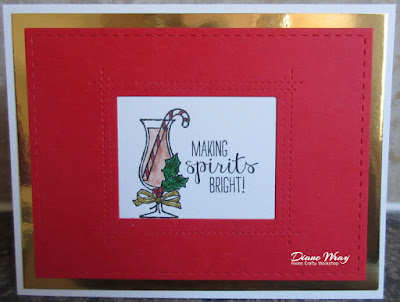 - stamped the festive cocktail onto Strathmore white 'Mixed media' card using Ranger 'Archival Black' ink. The image already has the sentiment alongside the glass stamp and is from SU's 'Making Spirits Bright' set

- die cut the images (with a further little bit of extra trimming from the top afterwards) using a square Spellbinders die about quarter of an inch wider then the aperture. This saved fiddling around with measurements as I wanted a neat rectangle of card behind the aperture just in case it could be felt - as it was it can't but worth taking extra care over

- then added very narrow red line tape around the back of the aperture itself and carefully placed it over the trimmed image. Safest way to do this isn't to just plonk it in place but just remove the protective backing from the bottom edge to line that up, stick it down when happy and then (using pointy tweezers) peel off the backing from the other sides one at a time - finishing with the top edge. Perfect placement every time without the risk of that super sticky red line tape ruining a card - I didn't use glue as it can be prone to oozing or not being close enough the the edge of the frame

Hmmm, it's better in real life but the peek-a-boo stitched die is definitely best cut using white card - it stands out much more clearly.

So that brought me within sight of the annual Christmas card target - wahoo! To be honest, this year has been a struggle due to Mr Mojo going off on walkabout as well as me trying to reduce the time spent at the desk - which certainly is a big trigger for this wretched back. I might have to rethink things for this coming year and ease off a bit on the 12 per month Christmas card target - I've done it for five whole years (2013 onwards) and got quite a shock when I worked that one out! Looks like some folk (such as non-crafters) will be getting shop bought cards in future - I could never stop making Christmas cards but the pressure of producing so many is getting too much.