I recently sold quite lot of my Stampin' Up stamps on Facebook - but (sigh) along the way I did give into temptation and buy some pre-loved ones. I did give each one serious thought and a lot more left the building than arrived here.

One of the stamp sets (I think it's about four years ago it came out?) just screamed to be used for a lovely blogging friend's Birthday a couple of weeks ago: 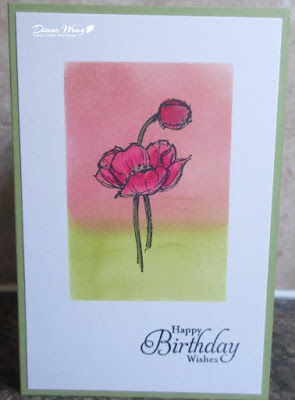 - the white layer was made using a piece of Strathmore Mixed MediaVellum surface 300gsm paper, with a rectangular aperture mask taped over the front. I used a Lil' Inkers Stitched Rectangle die to cut the aperture piece from a snippet of white card - and kept the stitched centre for future use as I was only using the outer part for now

- then coloured the flower and bud using Ziggies and a waterbrush

- glued the panel to the card front and ran off to the Post Office - just in time!

One point, the set was unused, but wood mounted. So my SU Stamp-a-ma-jig was a real 'must' when positioning the flower and sentiment - never get rid of things like that even when there are Misti's to be had. Certainly not if you have lots of wood mounted stamps as I do - and I ain't about to even think about removing them from the wooden blocks.

I've done similar things with die cut apertures as a mask before and really should knuckle down and get more practice as it's such fun.

Such an awesome card! Love those colors and such a beautiful flower.

It's a Poppy, what more can I say Di other than a beautiful creation.

A fabulous card and a beautiful stamp.
Kath x

Had to smile at the fact that you felt compelled to add more stamps to your collection despite moving some of your older ones to pastures new - we all do the same sort of thing I'm sure! Very pretty card and a handy tip about keeping the old style stamp positioner - now I know why I never throw anything out which might be useful!! Plenty of evidence around the house of that trait.

Hi Di this is a stunning card. That stamp is beautiful. Take care. Hugs Jackie

Yep - couldn't agree more . . . there's still room for a good old-fashioned stamp positioner in the craft room, even if you have one of the modern MISTI type things!

Absolutely LOVE this pretty card Di. Great use of your Distress Oxides.

So beautiful Di, a gorgeous stamp.

Good job I didn't see it first. This is lovely Di,. The background is gorgeous. Iv'e removed stamps from Su's wheel things they did a few years ago and they came off ok. Erm can someone now tell me what to do with the ensuing strips?! Hugs Mrs A.

Could you use them together to make random background patterns Mrs A or to use on strips of coloured card to make a striped pattern, also I have seen die cut flowers with a different pattern on each of the petals. Maybe this wouldn't work as obviously I don't know what sort of designs they have. Hope this is of some help. x

I love your sweet flower and the oxide background is really pretty with it Di. Like you I will certainly at some point have to dispense with a few of my older less used stamps to make room for some newer models, I'm sure that us stampers are all alike in this respect. I think the day I don't want to get any new stamps is the day I give up cardmaking...lol. x

Very pretty! I use my stampamajig a lot too. I rarely buy new wood stamps but I am certainly not going to get rid of them just because they are wood if I like the image. Have a good day!

Very pretty card Di...I do like your oxide background. i too need to part with some stamps (so hard) and have a stamp postioner hidden somewhere in the craft room. promising myself areal good sort out new year...a ruthless one...but will be keeping all my wooden stamps though! Hugs xx

Lovely card! Personally, I like the feel of the wooden stamps as I use them and use the positioner all the time. I do have a MISTI too. Maybe a stupid question, but what is an "aperture"? An English term for a cut-out?

Hi Jeanne! Yes, an aperture is English-speak for a cut-out. We Brits do like our long words, this one comes from Latin and basically means an opening or hole.x

I can see why you gave in to temptation for this classic set, Di! You made it shine with your masking and blending and stamping! It's gorgeous!! Hugs, Darnell

Gorgeous poppy and such a beautiful background, I can see why you just had to have it.

One of my favorite designs & in fact, I just pulled out a similar card I made quite awhile ago that's going into the mail. I know what you mean about the wood mounted stamps--have tons of them & the old fashioned stamp positioner is coming in handy! I used to accept the lighter inking, but now I want it to look like it would if I was using the MISTI!

So pretty Di! I love that soft background!

Brilliant card Di love the use of DOX amd also the framing...
...and well done on downsizing, must confess though I do the adding too. Hard isn’t it. ;-) we’re our own worse enemies.
Hugs Shazx.

Beautiful card I think i've got that set unlinked! Still got my stamamajig too!

Smashing card, sure your pal loved it.

As to unmounting stamps from their wood blocks .... I recently started doing this and find some manufacturers easier to unmount than others! I bought a whole load of zippy little bags and cut myself some card, stamped the image and wrote details on the card (manufacturer, name and date if possible) before putting the card and unmounted rubber in the bag. Sure freed up a lot of space but I sooooo do NOT fancy completing the exercise with the rest now!

Thanks for that Kathy - so I won't even think about it any more :) xx