Stuck for ideas for a Birthday card for a neighbour's little boy, I asked my in-house critic and his immediate response surprised me. Apparently, he'd noticed Josh, with his little spindly legs, trotting to and from school with a guitar slung over his back now and then!

That was a good enough starting point and this is what I ended up with: 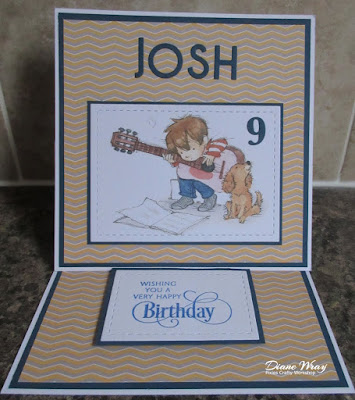 - two identical pieces of designer papers from the Studio Calico 'Snippets Collection' paper pad (how appropriate is that then?), trimmed down, backed with deep blue card and glued onto the inside of the easel, as well as onto what would be the 'standing up front piece of card'

- used the Misti to stamp the sentiment onto a snippet of white card, using Memento 'Danube Blue' ink and a stamp from the Penny Black 'Special Thoughts' sentiment set

One finished card - and it was made well ahead of time for a change as well!