Well, here comes Winter and the long dark nights. We changed the clocks here in the UK (well, at 2am on Sunday if we're being pedantic). So, it's time to snuggle up and start thinking about Christmas really. Almost into November folks!

But, we have a few Birthdays amongst friends as well as family before then so my snippets card this week is one I made for Len's great-nephew's 16th Birthday, which is on Tuesday of this coming week.

I will hold my hands up straight away and confess that this is very similar to a great card that Kath (Handmade by Kath) linked into the Playground back in May of this year - here's the link. I'd run straight off to buy the stamp set and then when I came to use it last week, without realising, I came up with almost the same design as Kath - except that I only used one of the two sentiment stamps from the set. To be honest, due to it's design, I suspect there are a limited number of ways that it can be used - certainly a DL card is a perfect companion!

Anyhow, this is what I'm rabbiting on about:

- two long snippets of paper from the 12" Studio Calico 'Snippets' paper pad (best to at least cut these before doing any stamping in order to get the positioning right). Yup, there IS a lovely contemporary paper pad design called 'Snippets' - which a lovely blogging friend surprised me with as a gift a while ago!

A quick and easy card to make (perfect for a male or female if you use appropriate colours) - although another time I think I'd just use a Pro marker or similar to colour the numbers rather than spending ages carefully fussy cutting them out. I like this idea as it does make the recipient stop for a second - and it's brilliant for male cards too of course.

Which, as is generally the case, leads us into this fortnight's prizes - note the plural there: 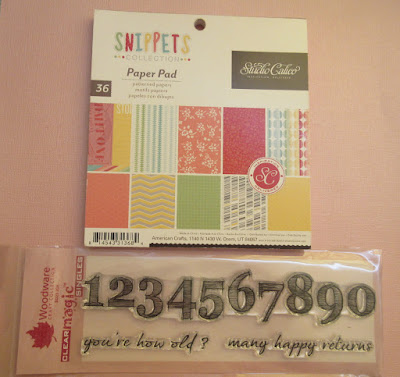 Just for the fun of it, I added a 6" x 6" Studio Calico 'Snippets' paper pad to the Woodware 'Numbers' stamp set as it's one of the best contemporary pads I've seen.

They took a bit of tracking down but were half price which was a bonus. However, the postage was outrageous just for a single pad, so I ordered two for the same postage all in - subsequently discovered they're sent from Spain so the postage is (almost) forgiven (bless though, they did include a little flat heart shaped lollipop in the package as a little thank you)!

And I also bought a second 'Numbers' stamp set - which means there are two prizes the same this time round - stamp set plus paper pad. The paper pad is actually only 6" x 6" but it could still be used with this stamp (which is about 7.5" long) - I'm sure you'd find ways! Mind you, it would have a ton of other uses as well. And of course the prize can be split - I will post the prizes to anywhere by the way.

The Snippets Challenge will run for two weeks and the Playground gates will close at 11am UK time on Saturday 11th November. The gates will open again at midnight UK time on the same day.

It's a maximum of ONE entry and please say in a comment if you wish to play and be a possible winner of the prize. As I already said, the prize is as above and I will happily split the stamp sets and paper pads, in which case I'd do further draws for the other items. Please also link back to the Playground in your blog post to be eligible for the draw.

Be sure to call back next week to see the winner of last fortnight's prize which is Avery Elle's 'Ribbit Ribbit' stamp set and MFT's 'Rectangle Peek-a-Boo Window' die, another lovely Guest Designer and my picks from the past two weeks.