Happy Birthday for today, Len! Here's hoping you have a great day and that the weather is kind for things we have planned - even if we have to wait until later in the week due to high winds forecast.

My snippets card today is also Len's Birthday card - besides hedgies in the garden, we have a few resident frogs. No pool or pond to speak of, apart from a ground level tray with water in for birds when they're too lazy to use the 'upper pool' - but those little frogs manage to survive. So here's what I made: 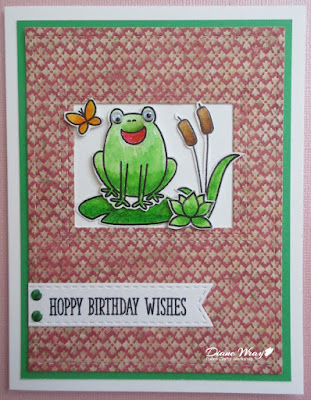 - then I chose a rust and beige patterned snippet which was tucked in the back of LOTV's 'Country Gent' paper pad, to match the colouring I wanted to do and backed it with white card just to make it more sturdy

- also found a green snippet for the backing layer - then I coloured the stamped images using Ziggies (which are pretty unforgiving in photos I see - in real life the blending looks quite good, sigh)

- using MFT's 'Rectangle Peek-a-boo Window' die, I die cut an aperture in the patterned paper layer and backed it with a snippet of white card

- ready to assemble the card now, so first of all I added the sentiment banner where I wanted it to go and snipped away the excess overhanging the left hand side of the patterned layer

- then added googly eyes to the frog and clear Wink of Stella to the butterfly, bulrushes, lily and lily pad

- final touch was two shiny green Josy Rose nail heads to the left hand end of the sentiment banner, ages since I used those little cuties!

This is such a cheeky set of Avery Elle stamps, with some very 'froggy' sentiments. I now know there are matching dies (duh) but to be honest the images in this set are very easy to cut out freehand. And they're great for those difficult male cards too. I also used 'that' MFT stitched aperture die yet again (one of my very favourites needless to say!), and realised that the stitching doesn't show up too well on heavily patterned paper. But, it was a bit too late when I realised - plus of course I was planning around this fortnight's prize(s)!

And that leads nicely into our prize(s) this coming fortnight, which of course are: 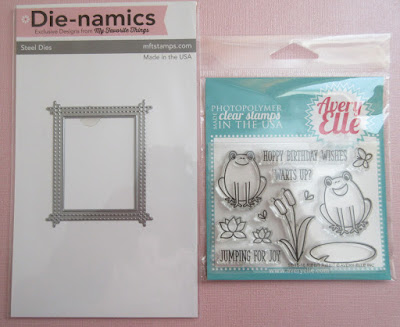 Avery Elle's 'Ribbit Ribbit' stamp set and MFT's 'Rectangle Peek-a-Boo Window' die. I know, we've had the stitched rectangle die as a prize at least once or twice previously - but it's always so popular I thought there would still be people who would like it - and of course the prize can be split.

The Snippets Challenge will run for two weeks and the Playground gates will close at 11am UK time on Saturday 28th October. The gates will open again at midnight UK time on the same day.

It's a maximum of ONE entry and please say in a comment if you wish to play and be a possible winner of the prize. As I already said, the prize is as above and I will happily split the die and the stamp set, in which case I'd do a further draw for the other item. Please also link back to the Playground in your blog post to be eligible for the draw.

Be sure to call back next week to see the winner of last fortnight's prize which is a MFT's 'Bold Stripes' Cover-up die plus MFT's 'Essential Sentiments' set of stamps, another lovely Guest Designer and my picks from the past two weeks.