How ever did that happen? Len's eldest grand daughter was ten years old yesterday and, like a lot of little girls, she's very much into horse riding as well as ballet. I made her a 'horsey' card last year so it was an 'easel style ballet' theme this year: 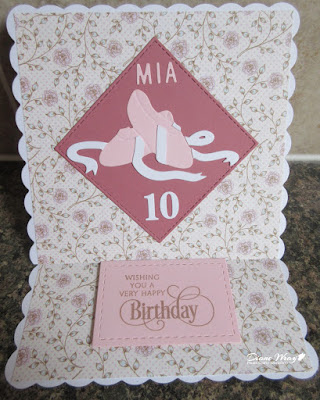 - two identical pieces of designer papers from the Wild Rose Studio 'Vintage Rose' paper pack, trimmed down and glued onto the inside of the easel, as well as onto what would be the 'standing up front piece of card' (there must be a technical term for this surely?!

- then die cut it again using a snippet of white card, backed with Stick-It, for the ribbons

- snipped the white ribbons (they did need some careful trimming, I will not lie!)  and fixed them in place onto the shoes

- despite using the embossing plates and rubber mat for the pink shoes themselves, I didn't feel there was still enough 'definition' and they looked just like a clump of pink, so I deepened the embossing using a ball ended tool and a soft mat behind the die cut

Adding the white ribbons with some careful trimming worked wonders - but, truth be told, I found this to be a hard die to work with. It cuts brilliantly but one really shouldn't need to do all the eyeball trimming and tweaking I resorted to. Bit of a thumbs down for one of my favourite range of dies there I'm afraid, sigh.

After taking the photo I did add some clear Wink of Stella to the white ribbons to give them a bit of a satin sparkle :) It probably wouldn't have shown up on the photo in any case.

Next Birthday coming up is Mia's younger sister Olivia. That's going to be so different - think football, horses, scuffed knees, dragons and such, then you'll be on the right track! I might need to shout for help from Len!

What peculiar weather we're having - it's impossible to really plan full open air days so for now our trip to Portsmouth Historic Dockyard is on ice. Ha, the following week is half term when we usually avoid being swept along in hoards of kiddywinks. We'll see - decent weather is the most important thing. I can always take a little pitchfork to move the little perishers out of the way!

As I type this am a little bit behind on Playground commenting - never fear, Parsnip and I are watching what's going on and I'll be hopping about your blogs ASAP. He really is a school sneak if he thinks there's any rattling of bottles behind the bike shed!