Most of you will know that I really love Penny Black Stickeroos. Up until now I've used them as 'toppers' on cards, always mounting them onto a snippet of card as a backing first as they really are impossible to move if you get it wrong when placing them.

I fancied making a little run of Christmas cards, so turned to a single sheet of Stickeroos and made five aperture cards for a change: 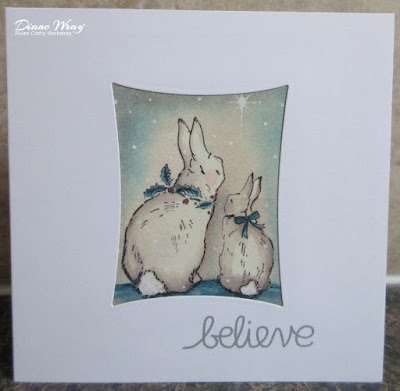 - five Stickeroos from the Penny Black sheet called 'Starry Night'. The sheet comes with six stickers in total but one just didn't 'do it' for me in terms of not being very Christmassy

- lightly marked the card fronts with pencil lines across the horizontal and vertical centre lines, placed the dies one by one on each card (used removable tape to hold them in place) and die cut an aperture in the front of each card

- used a soft eraser to rub out the pencil lines

Five Christmas cards rustled up in double quick time and I do like the 'Stickeroo behind an aperture' technique. The sentiments also look just right (in real life!) as the Memento 'London Fog' ink tones well with the actual Stickeroo images.

The sentiment stamps are from a set exactly the same as the one on offer as a prize this week in the Snippets Playground :)