The current challenge over at Less is More is to use 'purple and gold'. And appropriately enough, our own Purple Princess Kathy K was the really deserving winner for October over at LIM, well done Kathy!

Kathy is often the very first into Less is More on a Saturday morning, whilst I'm usually bringing up the rear at the end of the week! This is what I made: 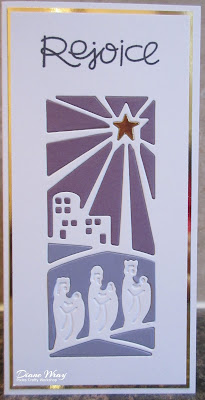 - a slightly smaller panel of the same white card, with the centre die cut using a die which came free with a recent issue of Die-cutting Essentials magazine (along with an embossing folder which has yet to be tried out here)

- backed the die cut panel with medium strength double sided sticky paper, leaving one side still covered and the sticky side showing through the die cut

- then used the same die cut to cut a gold star from mirri card and the rest of the scene in two shades of purple and stuck all the little pieces in place, inlaid into the sticky apertures

As I knew it was going to be a bit fiddly with several sets of die cuts to work with, I made two at the same time. Not identical, the sentiment is at the bottom of the other card - the one shown here was die cut with the image at the bottom hence the sentiment at the top. Not really what I planned 'cos it was a lapse of concentration on my part when placing the die, but I like it for a change from my usual 'straight sentiments go underneath the image'.