The current challenge over at Merry Monday is 'Birds' - and I really had fun making my entry: 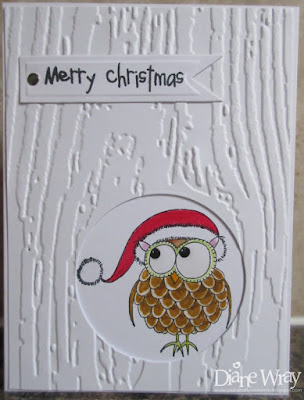 - took the card with the round aperture in and ran it through the Cuttlebug using the Tim Holtz 'Wood Grain' embossing folder, making sure the aperture was centred on where the embossed 'knot hole' is

- trimmed the embossed piece to size, just slightly smaller than the card front and making sure the round aperture was just a smidgen to the right hand side

- final touch, a platinum silver Josy Rose nail head at one end of the pennant

Am still adding any Christmas cards I make to this year's total. Had thought not to count them in and use them to kick start next year but decided that wouldn't be enough of a driver come 1st January when I begin the 12 per month target again. I know, it's all quite academic really :)

This is really one cute card! I love the expression on the owl's face! I already have a stack for next year, can you believe it? I over-created Christmas cards this year!

A cute owl Di and I think he looks great peering out of his hole in the tree. x

He's a lovely Owl Di, one I use many times, in fact last year her went onto 30 odd cards for my daughters sixth form class (she's the teacher not pupil).

The way you have placed him into the aperture with the embossed front work very nicely as well.

Your little owl with the Santa hat is so cute! Thanks for playing Merry Monday!

A lovely card - such a cute image and I like your EB folder too.
Kath x

Oh, this is delightful! The little owl is so cute and perfectly placed in his circular den inside the tree! :) Love so much the embossing woodgrain! Very lovely card!

AWWH, this is a darling card.

Super card Di. the owl looks right at home in the hole you created for him. Nice woodgrain embossing.
Jean x

Brilliant Di, fabulous use of the Owl stamp.

I love how you've cut the circle to place the owl in, Di! He looks so cozy all snugged in waiting for Santa! Thanks for sharing him with us at Merry Monday!

Super tree trunk you have made there for Mr Owl. I have one more card to make as a special for my hairdresser who loves all things tartan and then I'm calling it a day and sticking at 56. That Elf is driving me nuts. Hugs Mrs A.

OH this is sooooo cute! It's a hoot! Soz!

This is just the cutest ever! I have several owls coloured up and had already cut them into circle shapes. I may just have to try this with one of them!

Hopefull I have a 6x6 woodgrain EF...I always forget to use them so not too sure. Although with the way I hoard craft supplies, I probably do! lol

This is just the cutest ever! I have several owls coloured up and had already cut them into circle shapes. I may just have to try this with one of them!

Hopefull I have a 6x6 woodgrain EF...I always forget to use them so not too sure. Although with the way I hoard craft supplies, I probably do! lol

So, so cute! Love the background embossed. Thank you for joining us at Merry Monday!

Just one darling card. That little owl put a smile on my face.

Thanks for the comment on my blog - sorry to hear that the foot has worsened - hope you are getting good advice and help that will enable the right diagnosis and bring about healing. Hugs. xx

Love your little owl in his hole in the tree.