Last week in the Snippets Playground (#204), Kim posted a brilliant 'snowman viewed from above' card which I featured as a pick of the week. She also included a link to a website with some really lovely Christmas card ideas on it - I followed the link and fell in love with one particular card. This is my take on it: 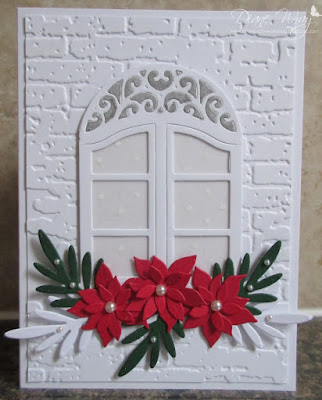 - a piece of the same white card stock, embossed using a Tim Holtz folder 'Texture Fades - Bricks', trimmed to just a bit smaller than the card front and then glued in place

- the original card I was CASE-ing used a lovely straight sided window die (possibly one of the Poppy Stamps Madison ones) - but I was playing with the only one I had which is a Spellbinders 'Window Two' die. Oh boy, did that add some work to the whole process, sigh! Without going into all the details I die cut the window using more of the same white card stock, left the fretwork in place using sticky tape to retain it, backed it with spotted vellum then backed that with more white card for stability. Lots of careful cutting and use of double sided sticky film needless to say

- in the process of backing the vellum (which is supposed to look a bit like a sheer blind or a voile curtain on the inside of the window) I lost the effect of the lovely spots so had to go over them using a white Stabilo pen - beginning to feel this was headed for the bin but soldiered on!

- one last touch (the following day) came about 'cos that fretwork at the top of the window frame looked very bland, with all the focus being drawn to the flowers and foliage. My in-house critic picked this up right away and suggested that perhaps the addition of some silver or gold might do the trick. Having slept on the idea, for fear of totally wrecking all that work, I bit the bullet and using a silver Wink of Stella brush pen picked out the fretwork - and it sparkles beautifully. Nice one Len!

I did have fun making two of these cards at the same time but if I made them again would most likely treat myself to the Madison die or similar - much less work and I think it's more in keeping with the embossing folder I used. Plus, I'd rethink the vellum - maybe plain vellum run through the Cuttlebug using a spotty folder would be better.

That's what crafting is all about - learning new things as we go along :)