Skimming along the waves

We recently needed a 16th Birthday card for one of Len's great-nephews but I'm not really into making male cards for that age group, and know little about his hobbies - although they live close to the sea. So I opted for a generic male card: 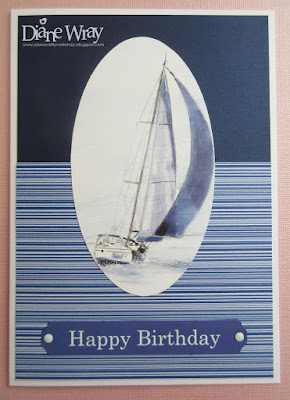 - sentiment is from the same set, with a white Josy Rose nail head at either end

Super-fast card, once I found all the bits to make it with of course!

Tip for today - pre-made die cuts with dark backgrounds such as the sentiment on this card can sometimes end up with little white 'pips' where they've been attached to the (usually white or a light colour) main sheet of toppers. These can be trimmed off easily with small scissors, but sometimes there will be a little bit of white left visible so I just run a matching marker pen round the edge of the whole die cut. I use Whispers markers for this as Pro Markers just might bleed a bit. Failing that, a medium grey marker pen run right round the edge would probably work well either - just to take away any patchy white bits.