By request - after a tortuous journey

A few of you wanted to see what the full end result was of the six weeks of tortuous en-suite shower room refitting. What was supposed to be a two week re-fit ran into a full six weeks - a lovely result but what a looooong haul to get there. I did a full test run yesterday morning and all seems to be well - brilliant in fact. And no damp patches on the ceiling below either (one of my biggest fears) - thank goodness!

This was at the end of day one as they started work - just a partial view of our bedroom, full of stuff ready for the job. It would appear that the bathroom company lack their own storage space don't you think? 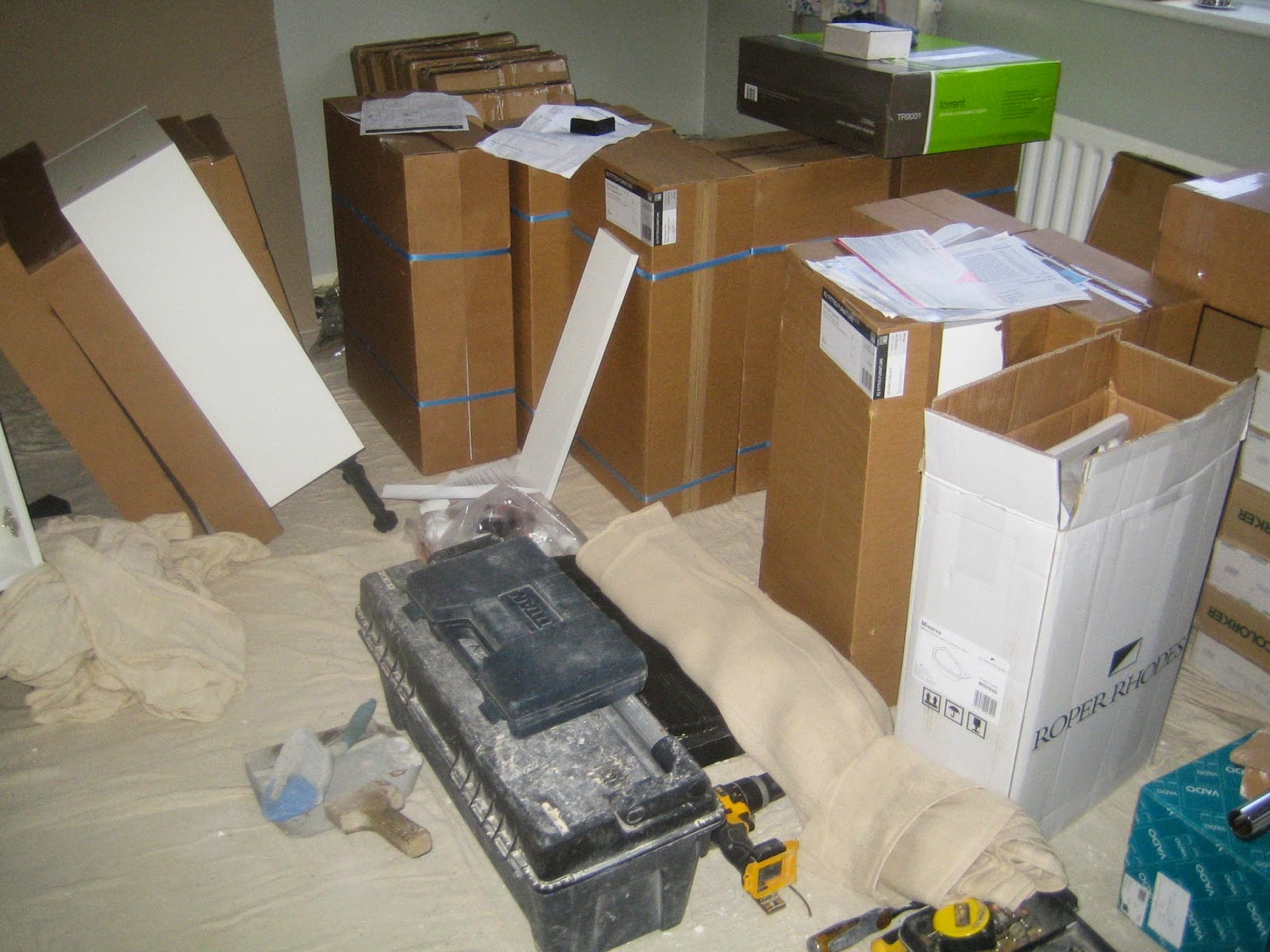 And six weeks later - tah, dah! At last :) The shower all ready to rock and roll. 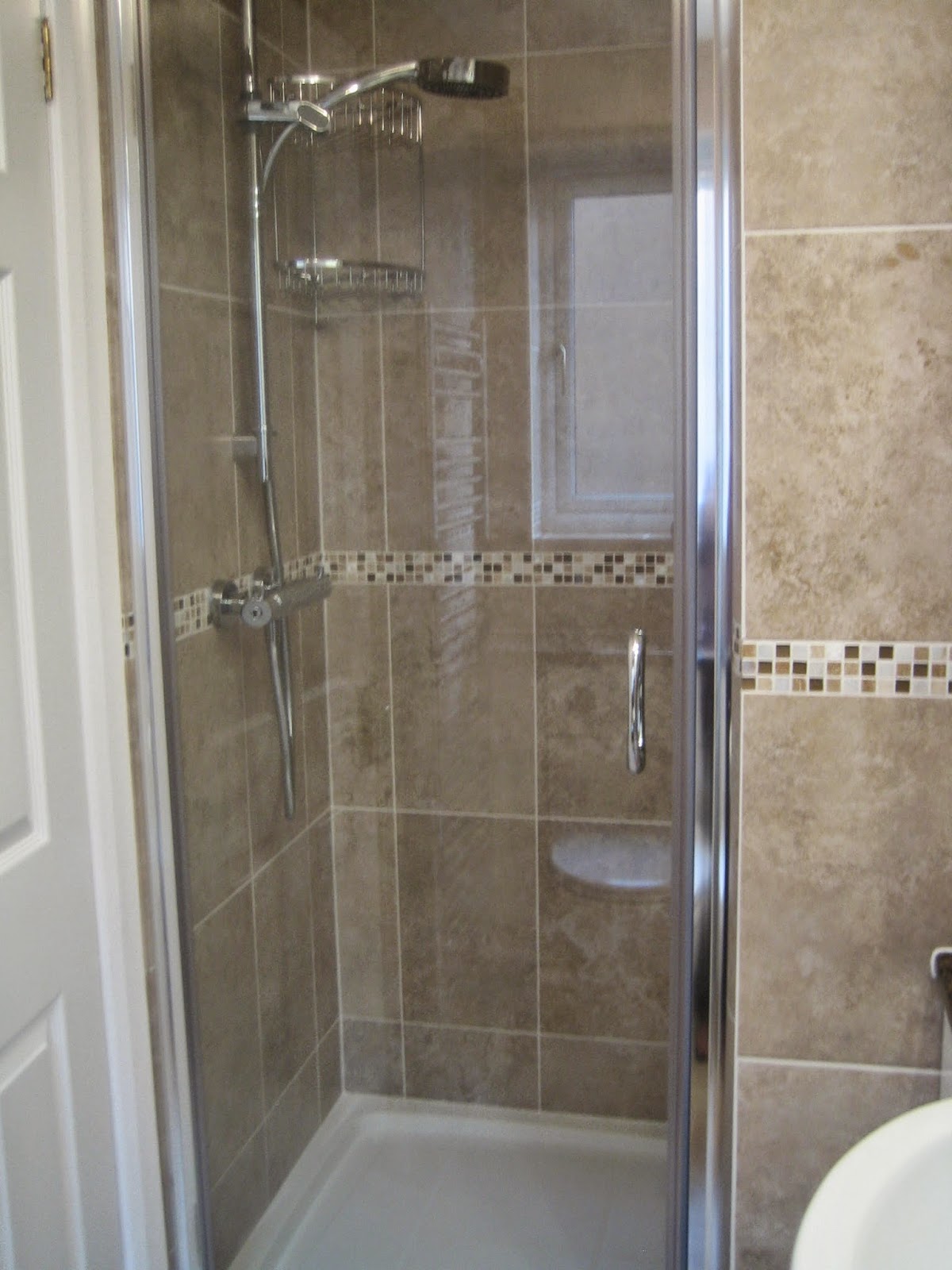 And the view from the shower. 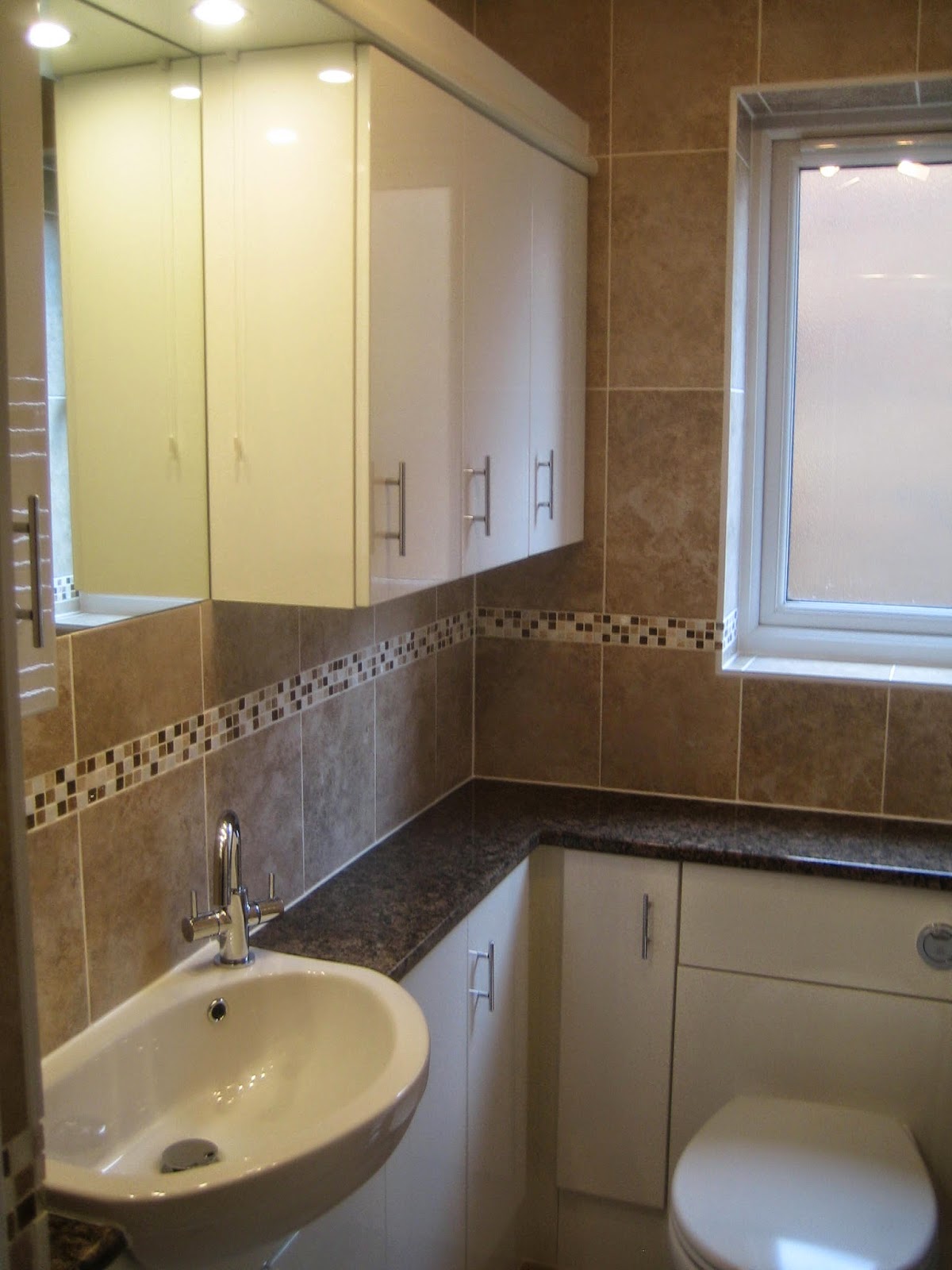 Tons of wall and floor cupboards for storage (10 cupboards in total) - yay, no more sprays and bottles of cleaning stuff cluttering the place up. Even the narrow cupboard to the side of the toilet will house the loo brush and bottle of cleaner nicely. And there's plenty of room inside the top cupboards for all the toiletries anyone could wish for.

As the window is on the side of the house and not overlooked I think the only window dressing will be something like a white orchid plant - artificial, given my lack of green fingers! 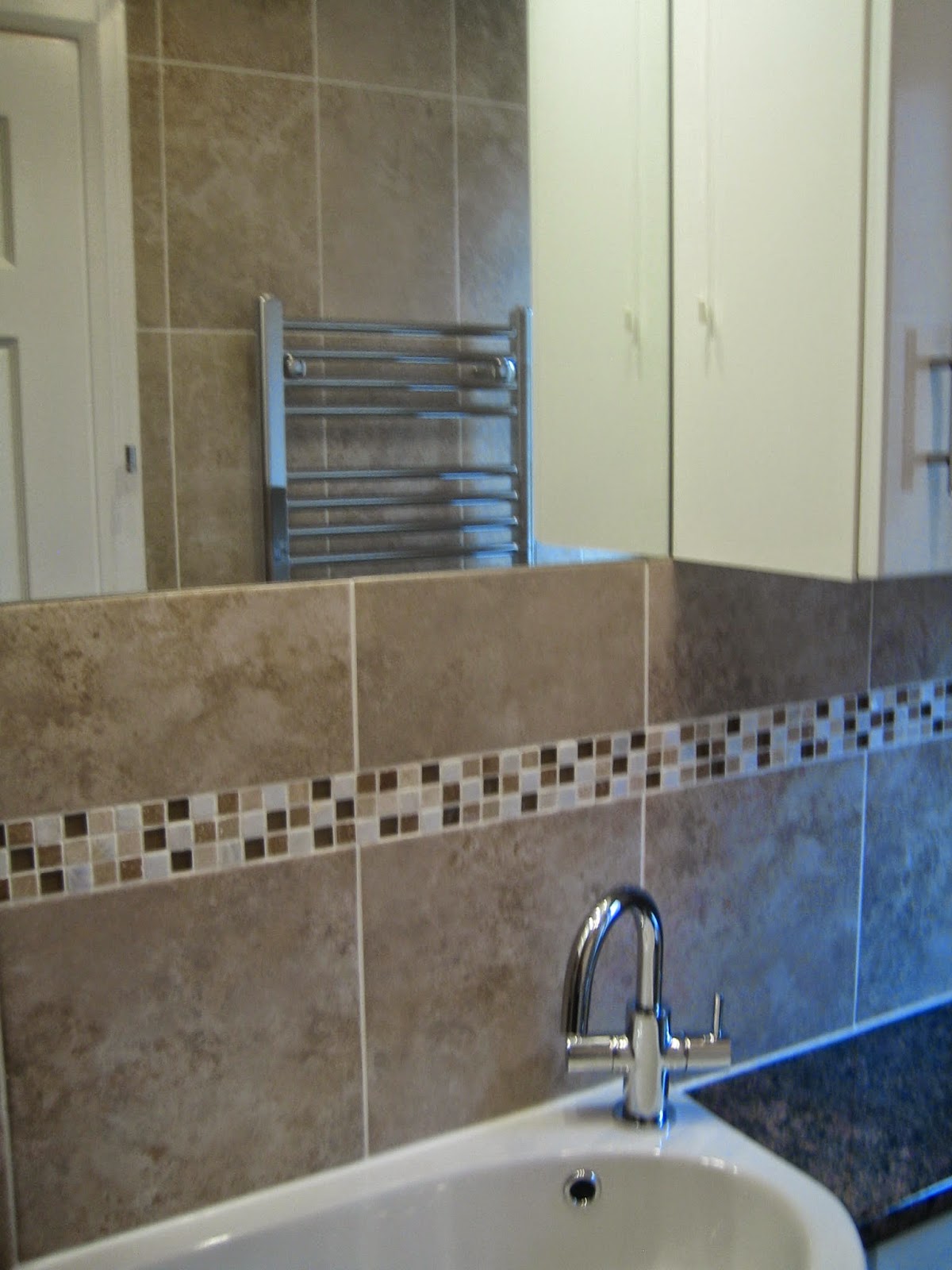 Dual fuel (central heating/electric) towel rail so no damp towels in the Summer. Am such a wimp! 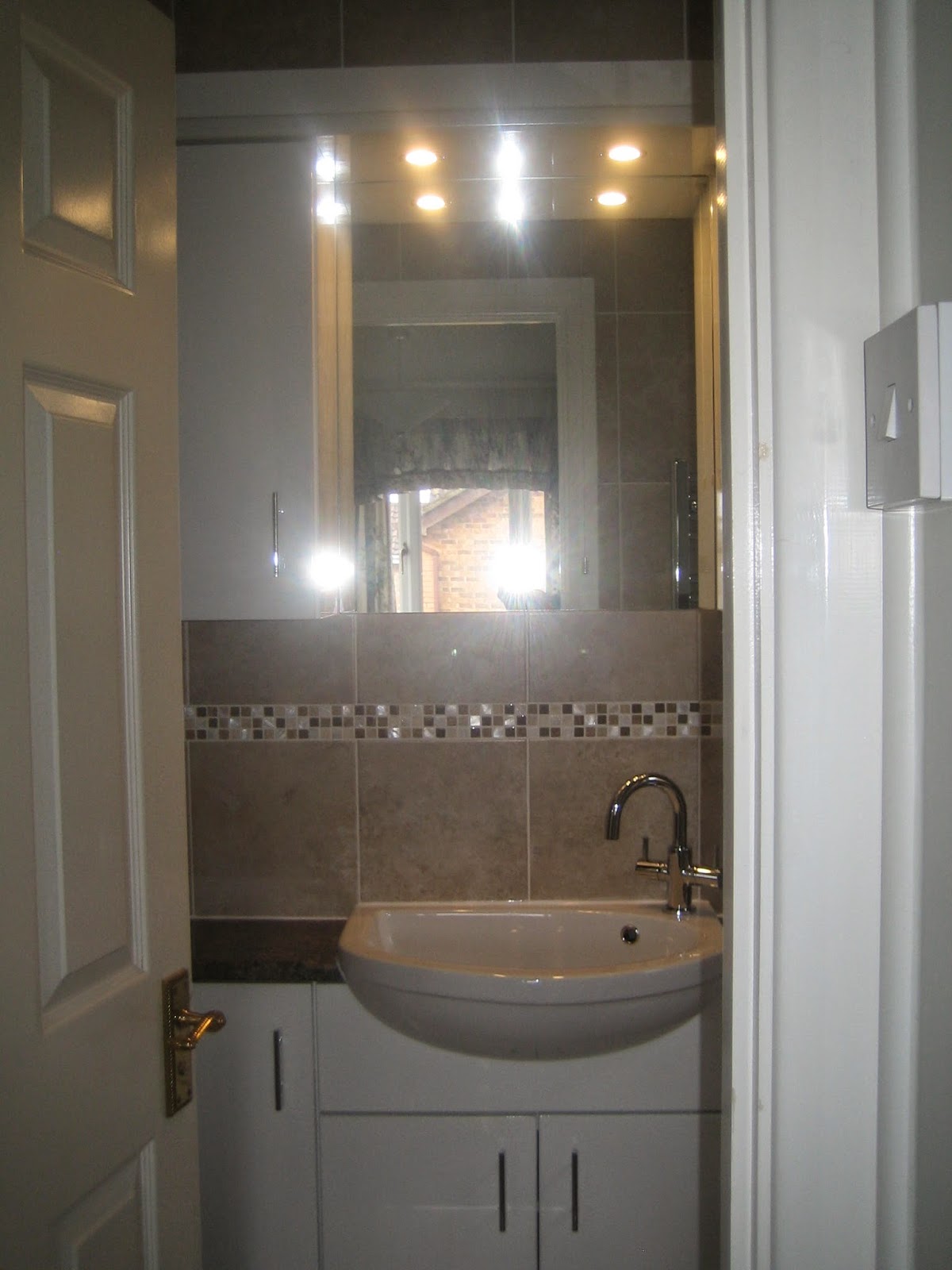 Taken from our bedroom, with the flash accidentally turned on - but at least it hides yours truly holding the camera! The mosaic border tiles fascinate me, some are stone, some are Mother of Pearl and some are light brown glass - a really lovely combination. But, as I've been saying - what a ride it's been!

Now there's the bedroom to tackle of course. The wallpaper border is finally all off so that's a good start!

Hope I didn't bore you - after a grim few weeks there's a little dog wagging two tails here (that would be me of course!). And Len is delighted to have the main bathroom all to himself again I'm sure :) Thankfully that was all refitted when we doubled the size of it during the extension build about five years ago - no way could either of us face this lot again - for a while at least! Never say never of course.