I spent hours yesterday tidying, sorting, even throwing out stuff in the craft room. Boy, that hurts to do!

During my rummaging round I came across a sheet of neglected and not my favourite Penny Black Stickeroos almost at the same time as some backing card which went with them so I made these: 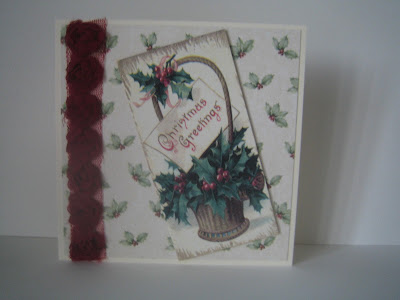 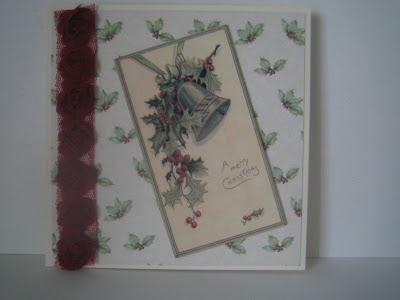 'Cos I struggle with vintage style cards I trotted into Len to show him and ask for an opinion - and they got his seal of approval. Ha, that could be 'cos it was almost time for dinner though :) And the light was dreadful when I took the piccies too.

I'm entering these into Crafty Hazelnut's Christmas Challenge where the theme is very open this week - either show a Christmas card you haven't previously shown on your blog or make a start on next year's.

The sorting and tidying still has some way to go here but at least everything I'd dumped on our bed has been properly put away. Somewhere to sleep is a great driver when sorting out!!

New Year's Eve already and I hope you have fun whatever you have planned. I find New Year a bit of a sad time and we always just spend it quietly - avec a glass or three of something though!

Sending you love and best wishes for a good year in 2013 with health and happiness. Forget the wealth - I know it helps but it's true that no amount of money can buy health and real happiness.

And oh my golly gosh, I just spotted that I'm almost up to 200 followers! Time for some candy I think :)