A robin in a huff?

Remember I used some of the fat and cute little robin stamps the other day? Well, this card has the addition of a third image which tickles me pink: 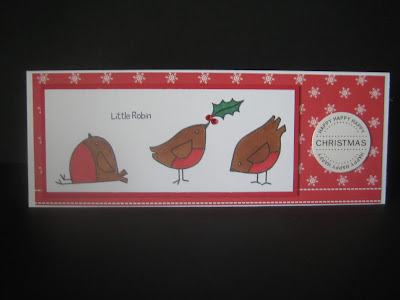 A bit like a girlfriend in the huff and so her fella is offering his piece of holly to the opposition :)

- red snowflakes and ribbon backing card from QVC at some point

- a couple of red gems as 'holly berries'

The postman brought two lovely packets yesterday, from Annie and Jo - one contained some adorable mice and the other a lovely Christmas angel (named Diane!) - similar meece and scrapbox dollies can be found in Annie and Jo's shop here. So beautifully made with such attention to detail - I'm tickled even pinker than I was with the robin image :)) If you're looking for Christmas makes then you wouldn't be disappointed I promise!

I'll try and post a piccie of them here but am typing this at 2:30 am and daren't disturb my in-house critic....as it is I have to try to wriggle into bed under the duvet very carefully and silently, and he always stirs and growls :(