I'm a great fan of 'bung it in the oven' dishes, especially as the days are colder, and there's nothing nicer than the smell of a hotpot cooking. My step-mum calls it 'pimpering away', which sums it up so well. Mind you, our postman seems to be able to smell a sausage roll from about a mile off when I'm baking in the run-up to Christmas - he often trolls happily off with warm sausage rolls to sustain him on his round :) 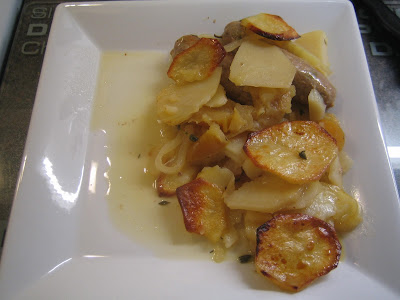 Heat 1 tablespoon of oil in a frying pan with the onion slices and cook over a medium to low heat, stirring occasionally, for 10-15 minutes, until really soft but not brown. Put the onions into an oven proof dish.

Add the rest of the oil to the pan and brown the sausages all over for about 5 minutes. Put them in the dish with the onions. Add the thyme, bay leaf and seasoning.

Heat the cider in the pan, add the apple slices and cook for 1 minute, then take them out with a draining spoon and arrange them in a layer in the dish. Arrange the potato slices in not more than 2 layers on top.

Pour the hot cider over. Dot the top with butter. Season well. Cover and cook in the oven for 45 minutes.

Remove lid or foil, turn the oven temperature up to Gas Mark 7 or 220 degrees C and cook for another 30-45 minutes until the potato is cooked and browned. If you want to speed up the cooking, put the dish under the grill but watch it doesn't burn. Serve with green vegetables - although spiced red cabbage is a lovely accompaniment either.

I let the oven do all the work, I can't be trusted with grilling things! If you don't want to use cider then I've made a very similar recipe using apple juice, which was just as nice.

You could use a mix of sweet potato, swede and such with the potato slices for variation - but good old potato on its own is lovely. Dumbo here peeled the potatoes this time but a good wash before slicing them is enough. Do leave the apples unpeeled so they hold some of their shape during the long cooking process (sorry Sarn, this is a 'long cooking' dish....but at least it isn't tuna!)

I have used dried thyme in the past, again it's just as good but obviously  you only need about a teaspoon at most in that case. The sausages don't have to be pork and leek either, normal, Cumberland or Lincolnshire sausages are fine - but the hint of leek does add a little 'Je ne sais quoi' to the dish. Sheesh, bit of posh French speak there :))

I do urge you, dear readers, to try this one - it's absolutely delicious and your whole family will be most enamoured with your culinary skills. (That's just what I would expect Mrs Beeton to have written - in other words, give it a go, I think you'll love it!!).

Happy Friday - the weekend beckons......and so does a load of ironing unfortunately :((