I originally found this 'recipe' in a little Kraft Cheese recipe booklet - more years ago than I care to remember! The booklet is long gone but it's more of a 'way of putting something together' than a real recipe anyhow. I think of it as a twist on lasagne: 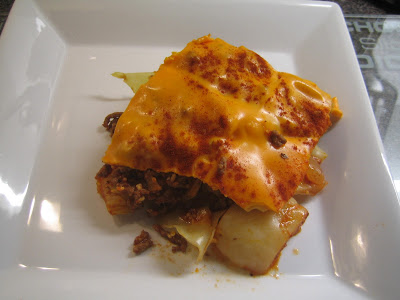 Bolognese sauce
1 white cabbage
20 cheese slices - or less if you wish, but a pack of 10 isn't enough. These should be the 'processed cheese' slices as they melt better during cooking and I've found that a supermarket's own brand works fine.

I think everyone has their own way of making bolognese sauce so all I'll say here is to prepare a pan of the sauce as you would normally do. And, I'm thinking about Bubbles here, this makes a good meat free dish if you use something like Quorn mince.

Meanwhile, chop the white cabbage into chunks. A green (Savoy for example) cabbage won't work so well as it doesn't keep the crunch and can make the end result too watery. Boil or steam the cabbage until it's still 'al dente' (get me!) and has some 'bite to it still and then drain it really well. I reckon 10 minutes cooking time max.

Then you begin layering into something like a pasta dish - half the bolognese sauce, half the well drained cabbage then half the cheese slices to cover the whole surface. Repeat, ending with a top layer of cheese slices. If you're really into cheese you can add a sprinkling of grated cheese on top - last night I just sprinkled some paprika over the surface.

News on the IT support front, I spent two and a half hours at my friend's trying to sort out her internet problems - even to the extent of hooking up one of our spare modems and goodness knows what. By then it was looking like it was the laptop that was sick so, in the end, I brought it home for my 'in-house' IT chappie to look at. I do feel vindicated though as, after over another three hours (that man is like a dog with a bone and won't be beaten!) the problem was resolved. This makes me laugh though - it turned out that a couple of software drivers had to be loaded onto the laptop to replace corrupted ones - and there was only one way of doing this. Yup, by downloading them from the internet! So, it wasn't something that could be fixed in isolation - and certainly not fixed by a laptop unable to access the flipping internet in the first place :)) Dontcha just lurve New Technology?!