Oh boy, I already am getting waves ripples of panic wondering if I'll end up buying some cards for Christmas instead of being able to make them all. Some recipients probably wouldn't notice anyhow, but making them all is still a target I've set myself.

Sooooo, when I was scrabbling round looking for lilac backing papers yesterday, I'm almost ashamed to say I stumbled across yet another 'forgotten' box with some Kan Ban Christmas kits in - a couple of them totally unused as yet. What I like about this particular kit is that it's pretty easy to select a sheet of decoupage (today's big word?) and some backing card to co-ordinate and whip up half a dozen cards on a little production line - a production line is a sure sign of panic here :( There are poinsettias, chandeliers and reindeer in combinations of ruby/red and a sort of pink colour, along with teal. I made six cards practically the same using one of the sets of reindeer and here's one of them: 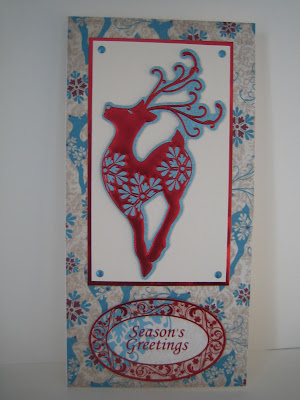 I hadn't realised just how 'puffy' these reindeer are - almost like padded satin, very strokeable! And having another look just before publishing this, they also look just a tad snooty :) The worst part though of this kit is the teeny little bits of white edging that you have to carefully snip off once the image has been removed from the 'holding sheets' in the kit - it seems worse than others I've had. That was fine for the reindeer but the sentiments were something else! As they're edged in red foiling you can't help but sometimes end up with a little speck of white showing even after they've been trimmed. But, aha, I remembered a little trick and just ran a red Pro Marker round the edge which cured it so easily :)

I've just remembered that St Luke's Hospice are having a Christmas Fayre next weekend so I guess I'll have to put my thinking cap on and come up with something other than mass produced cards to pop in the post to them ASAP. Hey, ho - no rest for the wicked! But there again, at the North Pole it's probably 'HO, ho - no rest for Santa' right now :)) Oooer, that reminds me ages since we watched the 'Polar Express', almost a year at least - a must in the run-up to Christmas!