A couple of weeks ago I realised that a little neighbour's 7th Birthday wasn't too far off, so my in-house critic asked his Dad what his favourite 'things of the moment' were. Last year it was Spiderman, which was a challenge in itself - this year it's the Avengers film! Talk about a challenge and a half - one of those times you wish you never asked a question :(

Anyhow, I poodled around the internet looking for free downloads and, after truly spending almost a full day on it, this is the card I ended up with. The image governed the card from the word go and there was an awful lot of compromising along the way. Not least as the in-house critic kept on throwing in suggestions: 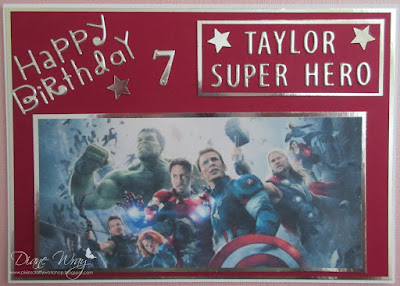 - backing layer of silver card stock, trimmed to just slightly less than the size of the card front and glued in place

- then the words were constructed onto a snippet of 'Raspberry Ripple' card and backed with a snippet of silver card. Tip for positioning letters when you don't want to risk using faint pencil lines, especially when the card itself is dark anyhow - use a strip of removable tape as a guide. I use the almost clear stuff but it's good enough to still see where you're going - and I've learnt the hard way over time to always press it onto whatever trousers or top I'm wearing first, just to get rid of any excess sticky - even removable tape can rip some card stock :(

Almost went into total meltdown when I realised that the two stars on the 'Taylor' panel were just slightly out of alignment with one another and I'd stuck them in place using Glossy Accents so absolutely no hope of re-positioning them :( Isn't it always the way, if you're gonna do a boo-boo then you'll do it right at the last knockings! I know it's just a fraction, but it might as well have been a mile at that point in what had been a looooooooooong day!

The Paper Smooches 'Birthday Words' die set was 'enabled' by Jules when she used it on a card the other week. She used it 'inlaid' - which I actually think is more effective but I'm not unhappy with the way I used it. It comes with the Happy Birthday words plus two other celebratory words - and of course when I nipped off to buy one set, a second one fell into the basket for the Playground toy box so watch this space at some point in the future :)

Jane W made a really interesting point recently. With dies becoming more and more intricate we're almost creating our own peel offs when we back card with adhesive sheet and then cut fiddly dies. It look like Little Claire have twigged this and apparently they've got some really great peel offs in stock - who knows, perhaps peel offs are due to return into favour. Hop over to Jane's to see what I mean - HERE.

As it's another very important 7th Birthday this week, I'd like to enter this into the current 7th Birthday celebratory challenge over at Allsorts. Well done to Brenda and the team for all your hard work and wonderful inspiration!

And - I'm pleased to report that little Taylor was delighted with his card! He must have wonky eyes like me :)

It was certainly worth it after all that effort, and I had to look twice at the stars - it's not that noticeable

Its a brilliant card....don't think it matters one jot that the stars don't quite line up! I wouldn't have noticed had you not mentioned it!! I am sure the recipient loves it! Great make Di.xxx

I wouldn't have noticed that the stars didn't line up either - although as I mentioned in my post yesterday, I get quite fanatical about buttonholes and my screw head bards lining up, I reckon stats (and snowflakes) are "natural" things and therefore allowed to point whichever way they like!
Thanks for the shout out - and for the mention of that fab Happy Birthday die, I think you may have just passed on the enabling!
Jane

A fabulous card and I'm glad to hear Taylor liked it.
Kath x

Fab card. Didn't notice the stars, but they look fine anyway, stars don't sit in lines lol! I was having the same thoughts about dies too.

Do you know what, Di? I like your stare just where they are. It only looks 'off' to you because you had a different plan in mind/you always align like that.
And no... I'm not just saying it to try and make you feel better!!!

A lovely creation for our 7th Birthday celebrations at Allsorts Di and well done to rising to the little lads challenge, many thanks for joining the party.

Eek! Spooky or wot . There are 7 comments in front of me. Haven't a clue wot the film is but your card looks great. Wonky stars or not. I'm terribly old hat then coz I always use sentiment stickers. Did wonder why I got 100 for ten quid mind!!! Hugs Mrs A.

This is a great card for Taylor and your stars are fine and as already mentioned I would never have noticed their misalignment Di. I still use stickers occasionally especially when in a rush and not wanting to spoil a card at the last minute or spend time fiddling with the sticky backing on a die cut so they do have their place. x

Hehe, I'm sure he loved it and wasn't looking at the wonky stars, though i feel your pain. Go and lie down. X

This card is just PERFECT for the little boy Di. No wonder he was thrilled with it. Blimey, I must have wonky eyes too then, cuz I never would've noticed a problem with the stars at all!

Happy Birthday to your little neighbour Taylor, I can image his surprise! :D Your card is just perfect for a young boy and the shining stars near his name look fabulous!

So glad Taylor loved his card after all your efforts Di. I think it looks fab and perfect for an Avengers fan, it is hard to keep up with the latest 'thing of the moment' isn't it! If you hadn't mentioned the stars I wouldn't have noticed!! It's funny that you mentioned peel offs, part way through my recent efforts with 'that die', I was thinking of digging deep down in my stash and blowing the cobwebs off the box of peel offs!! Perhaps they will come back into fashion again! The outline ones at Little Claires have made me think they can look quite good! Thanks for pointing me in the direction of inlaying the die, I love the effect and it would probably save me turning the air blue as I fiddle around. Hope you are having a good week, even though Hampshire seems a tad chilly suddenly, love Jacky x

Looks great Di. I bet he loves it! You found the perfect image and I like the touches of gold on your card.

Catching up on what I've missed this week! Loving pink flamingo below Di and I bet the little fella loved this card too! x

Great card, I like the image and the design, Thank you for joining in our Birthday celebration Challenge this week at Allsorts, Good Luck
Kevin xx

That was definitely a labour of love and I'm glad that your little neighbour loved it as it's fabulous. Cara x

Wow! So much work but the results are stunning. Love the silver words and the wonky star (srly, what wonky star?)