Inlaid die card - for a friend

The story behind this card begins with the lovely Tracey from 'Dies to Die For'. A small order arrived here last week and, as always, Tracey had enclosed some die cuts. Two of them were obviously made to team up together so I left them on the desk within view until inspiration struck.

I knew I wanted to enter Happy Little Stampers May CAS challenge, where the theme is 'inlaid die cutting' and then also spotted that the theme over at AAA Cards Game #64 is also 'inlaid dies'! Both challenges are looking for Clean and Simple designs so I hope my card is deemed CAS enough - the ornate edging on the craft card oval could be my undoing, but I had fun anyway. To hedge my bets, I'm also entering this into the new Happy Little Stampers May Anything Goes With Dies challenge: 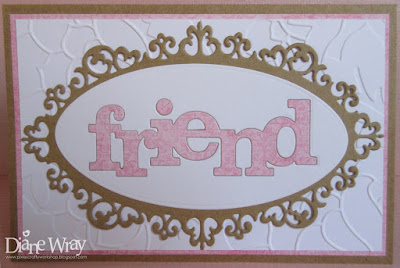 - next I played with the die cuts sent by Tracey, the scrolled kraft one was the reason I picked a kraft card blank

- after trying various dies for size I settled on the very simple 'In a Word: Friend Cutaway' die by Winnie and Walter die, positioned it on the white oval and die cut it - keeping the small pieces which fell out for later. I only had one shot at this of course so there was a good bit of measuring and use of removable tape involved

- then glued the white oval onto the fancy edged kraft oval

- next I die cut the word friend again, this time using a snippet of pink card from the Teresa Collins 'Sweet Afternoon' designer pad (which I'd backed with a piece of Stick It adhesive sheet)

- removed the adhesive backing sheet and put the pink die cut into the aperture then filled in any gaps with the saved white die cut 'fallout' (the Woodware Ultra Fine Tipped glue applicator containing Collall glue worked like a dream - I can't believe it took me so long to buy these!)

- then embossed a piece of white card using the Couture Creations 'Compassionate' embossing folder, trimmed it just just a little smaller than the pink layer and added it to the card

Writing this post has taken longer than it took to make the card - although Tracey did give me a good kick start! And what fun to enter three challenges at once, not often I manage to do that!

I think this is a great CAS, so clean and elegant, Di! Love the ornate frame and the pink word in the oval looks so lovely! Very classy embossing on the back, too!
Hugs, It's night here and I have to sleep :)

Beautiful card Di ... perfect timing for all the die challenges that are around right now. :) xx

A lovely card Di - the colours work so well together and I love the ornate frame too.
Kath x

Love your intricate frame die Di. I'm happy for you that your card was fairly quick to make! Don't think I'll be tempted to do another inlaid die card for a while ;)

Terrific inlaying resulting in a super card. Love all the die cutting and the pretty embossing folder background.

A super card for a friend. I really like the kraft diecut behind the sentiment. Barbxx

Hi Di, am loving your inlaid die cut, great use of your freebies too. I'm interested in the fine tip applicator. I just bought one on its way not woodware, but was good brand, cant recall so will see how it goes.. TFS
Shaz.x

Brilliant card. Love the pink and Kraft together. Cara x

Fab card Di love that die see you when we are back off our hollibobs! huggles Sue xx

Great friend card. I love the oval die in kraft and the letters in the pink are lovely.

Its a fabulous card. Its great when inspiration strikes! Thank you for joining us at HLS Anything Goes With Dies. Good Luck! Emma HLS DT member

Looks CAS enough to me and a fabulous design and great colours.

Your card is lovely Di, I too like the inlaid die technique.
Janice x

Perfect die for the inlaid technique, nice and chunky. Thanks for playing at AAA Cards.

I'm a huge fan of inlaid dies, and this card is just lovely! Well done Di!

The ornate fame die and the inlaid sentiment are fabulous! The embossed background is pretty too :)
Thank You so much for linking up with us at HLS - Anything Goes With Dies Challenge!

Oh, such gorgeous color combo and texture! Thank you for playing along with Happy Little Stampers!

This is so elegant Di and I always love inlaid die cards. The kraft, pink and white is a great combination and the background embossing is so pretty. x

Pretty card! I'm sure your friend that will receive this will love it! Thanks for playing along at the AAA Card Challenge!