The latest challenge over at Mrs A's Butterfly Challenge is 'Butterflies + A is for Aperture and/or Apricot'. Just one butterfly is acceptable BTW.

Apricot card stock is rare as hens' teeth here but eventually I found a paper pad with apricot/peach papers in so went with those, and came up with this (it was such a sunny day when I took the photo that the colours look paler than they are in real life): 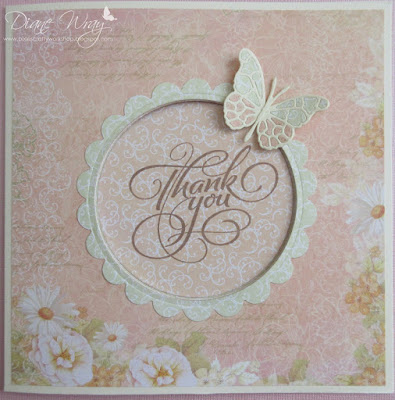 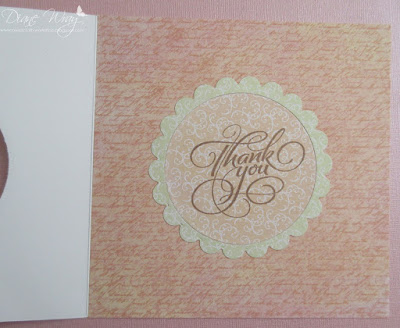 -  die cut the sentiment panel using the same plain round die as before and glued it in place behind the aperture. Easiest way to do this is to close the card front then apply the circle through the die cut hole to ensure it sits perfectly behind the aperture

- cut another pale green scrolled patterned frame to go around the circle and glued it in place, to echo the front of the card

- then die cut two 'Pippi' butterflies from snippets of Stick It backed leftover apricot and green paper and then inlaid pieces into the butterfly  (that was my moment of crafting madness as it took ages, I really should have listened to what Lindsey said about her using the same technique on a card I featured in the Playground the other week). You live and learn :)

For what I thought would be a quick card, this took much longer than I thought - but it was good fun to make!

That's so pretty Di, I love the colour

Very pretty and elegant. I don't think I will EVER have the patience to do inlaid die work, even on a far simpler shape!
Jane

The work was worth it, Di! This is very lovely and I love the vintage feel of the papers!! Hugs, Darnell

A lovely card - these are the papers that I had earmarked for my card! A beautiful butterfly too.
Kath x

It's a lovely card Di and such soft and delicate shades and Butterfly, perfect for the current challenge.

So delicate and pretty - fits the brief to a 'T'

A lovely card Di. That paper is really pretty. Barbxx

Di this is so gorgeous. I love that paper pad you found. Do you have a bottomless pit or suminck. Lots of patience needed here for all the die cutting and gluing but so worth every minute. Card will be entered twice into the draw.
I see your hotmail. Have they mucked around with your account too. First they chucked me out and it took 3 goes to get em to reinstate my account. Then I could only see me emails and couldn't reply or send any noooo wuns. Now today I have a new version and can't find nuffinck. Why oh why can't they leave things alone. It it an't broke dun fix it. I'm all of a diver and need a drinkie. Hugs me or it could be her. Who knows!!!!!

Such soft and pretty colours Di and the inlay technique is fiddly but well worth it as the end result is beautiful. x

What a lovely card Di. the inlaid butterfly looks gorgeous, so your hard work and patience paid off.

Beauty! Love the soft and harmonic pastel color scheme. And the time you spend on making this card sure guaranteed a fabulous outcome...I love it.

This is such a pretty card Di . I love the delicate background and the sentiment looks wonderful inside the aperture :) X

So lovely and delicate card! Love the papers and the sweet butterfly on the scallop frame, you have made a great use of snippets!

wow, so pretty and elegant, I love it.

What a stunning card, I had a difficult time with this challenge of Mrs. A's and yours is just outstanding!

This is so gorgeous Di. Love those pretty papers and super design. Know what you mean about the apricot paper - when Mrs A told me I thought 'no problem' until I actually started searching through the cupboard!!

As for my aches and pains - reckon it could be to do with the tablets I take for the osteoporosis. These quacks do like to make us rattle with loads of pills, don't they! xx

Such a pretty card Di, thanks for the details on how you made the aperture.
Janice x

So soft and pretty! When is peach color really apricot? When you say it is! Works for me.