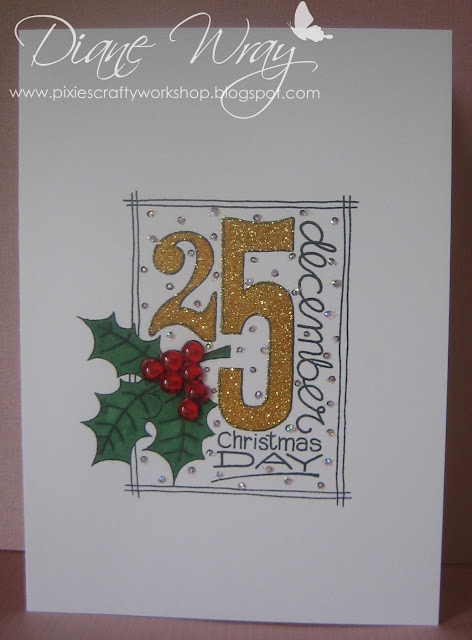 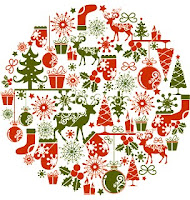 Worked out beautifully in the end - well done

Great card Di. I wish I could get motivated to do Christmas cards, but I am just not inspired so far. I know it is going to be a made last minute rush now!.
that has certainly done a good job with the glitter. Lovely! Kate x

Absolutely super duper Di, love it, perfect Christmas card and worth being disqualified even if it's unjustified. X

Gorgeous card Di. Great tip for adding the glitter too.

Gorgeous card Di and I can well imagine the glittery carnage that ensued. Love it.
Hugs
Caz x

I lurve this stamp Di - what a great one layer card. The glitter really finishes it off as well. Good tip using the adh. sheet. Saves getting it on every bit of the card (and yourself) if you use wet glue - lol.

Just off to finish that smidge of ironing - yuk!

This is absolutely gorgeous!!!
Thanks you very much for the tip about the glittered number 25...I love the size and scale of that number...the whole stamp is wonderful...did you create the collage or did it come all in one stamp...I can see this look being created from several stamps as well!!!

Thanks for sorting out my twin sister...she can be quite naughty and like to take over! lol

Oh I love you being a bit of a playground rebel! Think I might join you on the swings today and see what mayhem we can cause! Glad you had that light bulb moment and produced this gorgeous card - love the glittery numbers. Thanks for sharing this for both CHNC challenges and hope to see more soon. x

Morning rebel! I'm simply impressed that you put up with that much glitter! *shudders*

Wow! Love it - really really love this Di - it's stunning. Perfect CAS Xmas card - that stamp is going on my Xmas presents list - and I don't need any more Xmas stamps. Such a beautiful creation Karen xx

What patience you had on dem dere numbers. A lovely card
and super CAS effect. What's this about going to Flutterbys then Miss Huh!! Hugs Mrs a.

Wow, you did the inspiration piece proud....beautiful card. I love your glitter tip. And the Dew Drop holly...great idea and you are right, I think we all have tons of them. Again....great card!

Terrific! Love all the glitz.

Gorgeous card Di. Love the stamp and your added gliter is the perfect finishing touch of this CAS card. I spotted your card on LIM.

Tee Hee! You rebel Di, but I think you'll get away with it :D Fab card and I love the really glitzy 25, that's another Chrissie card done, :D Hugs Gay x

No naughty step Di, this looks tremendous!
Thanks so much
Chrissie
"Less is More"

What a beautiful card! Thanks for the tip on the glitter cause it's gorgeous! I'll be your still sparkling!

Beautiful card! You have achieved perfection! Wishing you a happy day today!

Fab card and the idea of you having to have a shower after using the glitter just made me laugh, it does get everywhere!

This card is just lovely and the way you glittered the numbers is ingenious, even if it did mean you had to shower to deglitter yourself :) Hugs, Elizabeth xx

Thanks for the great tip. Hope it doesn't disqualify you, as actually, you still had one layer...This was beautiful, & wonderfully done. You clever girl, you. Glad you had fun with your buddies. TFS

So sorry for my late visit. Thanks for joining us
Jen x
"Less Is More"

Congratulations on being showcased on LIM!!

whoop - well done on being showedcased at LIM with this fab card.
Linbyx

Love this one...great use of glitter...all cards need some sparkle!!!

I'm pickled tink to congratulate you for being showcased at LIM, Di! This card was SO deserving of being spotlighted!!