The other day, I grabbed a handful of shop bought (great source) Christmas card fronts, saved from Christmas 2021 that we'd been sent, and had a little session using the Gemini, die cutting the elements I wanted to 'up cycle'. It's a good way to do it by having a 'session' as I did. I wrote which die I'd used on the back of each die cut and also kept a few snippets of the same card fronts to potentially use for sentiments, on some cards, not all.

A day or so later I rustled up a very quick recycled card from the batch, in readiness for the current Rudolph Days Challenge over at ScrappyMo's HERE: 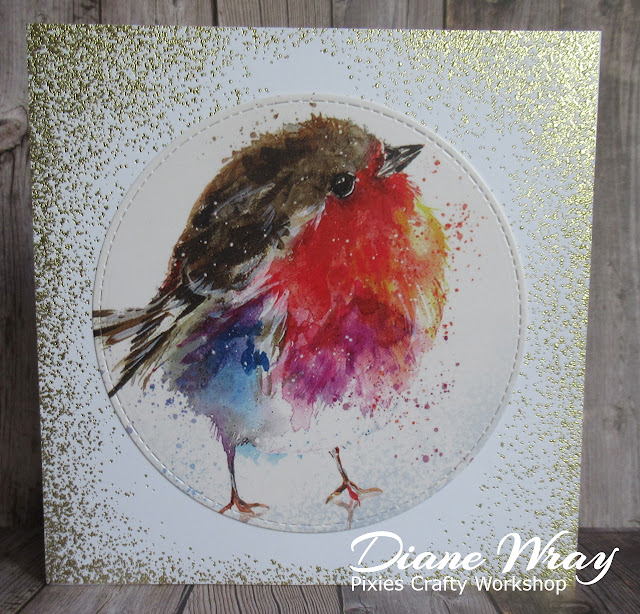 - the gorgeous gold embossed edged front panel of a card which originally had a lovely embossed Christmas tree die cut on it - it's kept kept to one side to be played with another time. We've had the same 'tree' card (probably from the same friend who feels that hand made ought to be repaid with a special card) which I up cycled last year I think/know!

- the centre of the panel had the very slight and thin remnants of the glue from sticky pads on but, I knew that would be covered by the image I wanted to add

- then pulled out a die cut really adorable robin image, from the front of another card, which I'd previously cut using a 4.5" diameter 'Stitched Circles' die by The Works

- glued the image onto the card front

- I always add printed or stamped inserts with Christmas greetings into our cards, so didn't spoil the front of the card by trying to add a sentiment

Very simple I know, but if the up cycled elements are pleasing, then try to work the card around them and let them shine and have a second outing. Better than being swamped with too much unnecessary 'stuff'. IMHO only of course!