It's been a week since I posted on here, for various reasons. I began this card hoping to join in with the Allsorts Challenge for a 'girlie' card but didn't finish it in time for the closing deadline. However, I would like to enter it into the current Allsorts Challenge #683, choosing the option of 'Anything Goes': 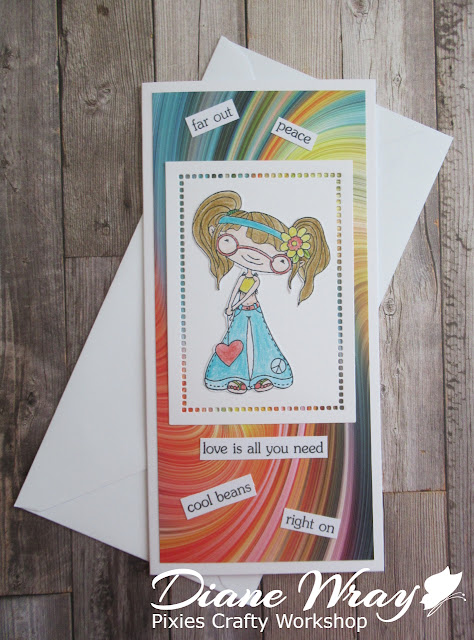 - a sheet of patterned paper from the wonderful Whimsy Stamps 'Taffy' slimline paper pack which just had a little trimmed from both ends. It's such a psychedelic pack of papers! Or did I just dream that? ☺

- the image is from a lovely (discontinued) stamp set by MFT called 'Far Out', can't even find any images of it on the internet

- glued the panel of psychedelic paper onto the card front

- then (sigh) decided that the image would be swamped if placed directly onto the vibrant background. So, I die cut a white snippets backing using two dies from the Spellbinders 'Hemstitch Rectangles' set of dies ** then glued the image onto it (a waste of that fussy cutting!)

- then glued the  image to the panel, image panel to the card front and then the snipped up words

Despite the Whimsy slimline papers being a little on the tall and narrow side, they are all so lovely! This pack especially is reminiscent of the days of LSD etc.Not that I ever ventured, a little before my time I promise, but we've all seen enough films about the visual effects of 'dabbling'.

And as so often happens, it's brighter in real life too - the light was streaming onto wherever I tried when I took the above photo.

** The rectangular hemstitched dies I used for the white panel came from my own duplicate set of the Spellbinders die set, forming part of this current challenge's prize. Well worth playing and still plenty of time to hop over and enter!

As the MFT stamps set, the Whimsy papers AND the set of hemstitch dies were having their very fist outing, I'd like to enter my card into Darnell's NBUS Challenge #40 HERE.

Dudley 'Pupdate'. A quiet week on the 'trouble' front for Dudley with no news of mischief - either he's hiding it or we're getting used to it! When he was not 100% toilet trained he did sometimes hide a little 'poop' in the dining room, nice choice of room - so nothing would really surprise me. The hedgies are out and about every evening, and they fascinate him - he never touches them but they do get a good sniff! He's four years old later on in July - how did that happen, where did time go? He had a bath yesterday so we all got a good soaking - right now he's really white and fluffy, still with those pretty peach tinged ears. And, they're growing back nicely since Len had to give them a serious trim a while back.