Mo, over at the Rudolph Days Challenge, is (in addition to her usual lovely prize) giving away an extra prize this month, as a tribute to our lovely friend Kath, who we lost in August of this year. To qualify for a chance to win a great Woodware 'tall and slim' stamp set, you have to use paper piecing on your RD entry. That was one of Kath's favourite techniques and she also loved Woodware stamps. So very fitting Mo - a lovely idea!

I pondered about using my own 'identical to the prize' stamp set but, in the end, the lure of a NBUS and totally unopened stamp set won! Even though I'm not playing for the Woodware stamp, it seemed right to use paper piecing.

And this is the card I made: 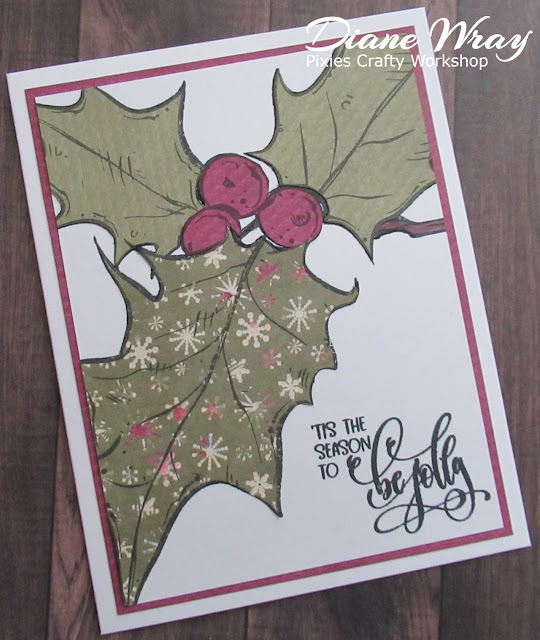 - piece of white card stock, onto which I stamped the really huge holly outline and also one of the many sentiments in the same set which is Colarado Craft Company's Big and Bold 'Holly and Berries', using a Memento 'Tuxedo Black' ink pad plus the Misti

- next, used a few snippets of paper from LOTV's 'Woodland Wishes' Christmas paper pad, onto which I stamped the holly leaves and berries

- inked in the tiny pieces of branch, using a dark brown Whispers pen, no way were they being paper pieced ☺, then fussy cut the three holly leaves and the berries before running a black Whispers pen around the outer edges

- trimmed, trimmed and trimmed the image panel down until I thought there'd be nothing left of it - it ended up at 5" x 3.75" in the end, just the right proportions for a USA A2 sized card

- then cut into a fresh sheet (shock, horror), of 'almost plain' magenta paper from the same LOTV pad and trimmed down a backing 'frame' just an eighth of an inch bigger than the image, on all sides

You can probably tell that with some cards I begin with the image, before deciding on the final card size. Just as well, as I had one problem after another making this card. I even lost the first set of 'stamped berries' to be paper pieced and no end of searching would reveal where they'd hidden. Edit: Needless to say I found the missing set of stamped berries the following day, on the floor behind my chair! I also accidentally tore up a holly leaf whilst searching! Needless to say I'd already packed away the stamps set ink pad, Misti etc - I know - too confident right? In  my defence, I was only being good and tidying up as I went along - but yet another lesson learned.

The card was originally to be a totally different shape (square), and much larger size, but the 'forces' were against me - sigh. However, I will have another bash, possibly for a batch of them - next time using Pro Markers! It has to be one of the trickiest paper pieced cards I've ever made.

I'm quietly pleased with the fact that it's not 'quite' traditional Christmas green and red and think you could only really get away with that by doing paper piecing.

Kath - I promise you - I battled on down here and, at times, only the love kept me going.

I'd also like to enter this onto Darnell's NBUS #31 Challenge HERE - the stamp set was new and unopened.