The current challenge over at Christmas Kickstart for October is 'Make one for a loved one'. Our lovely Playground friends Jo (who runs this really great monthly challenge) and Lynne in NI (Ruby's Mum, as well as this month's Guest Designer over at 'Kickstart') would love you to join in! I have lots of loved ones in my family, circle of friends, bloggers - and of course Len and Dudley. In fact, I think this first card is just perfect for Len ............ from Dudley Dog - 'There is snowone like you'. Dudley idolises Len and if he could speak I'm sure those would be his exact words: 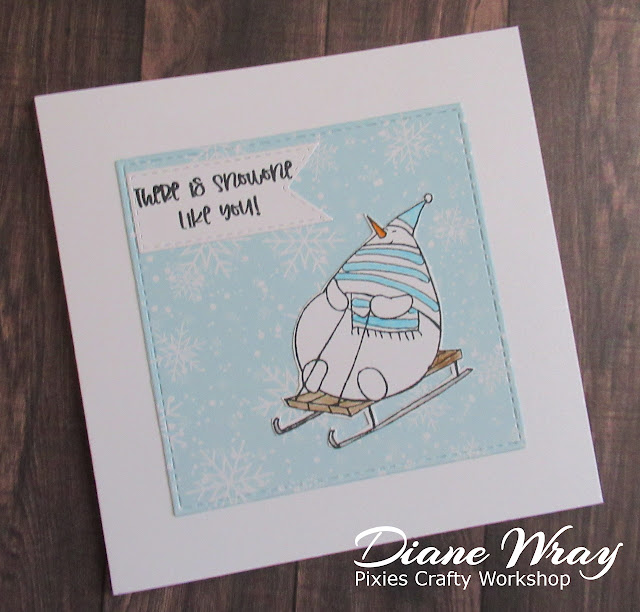 And I made a batch of six altogether, using the same set of stamps, different backing papers as well as sentiments - two identical ones of each card. Here are the other two: 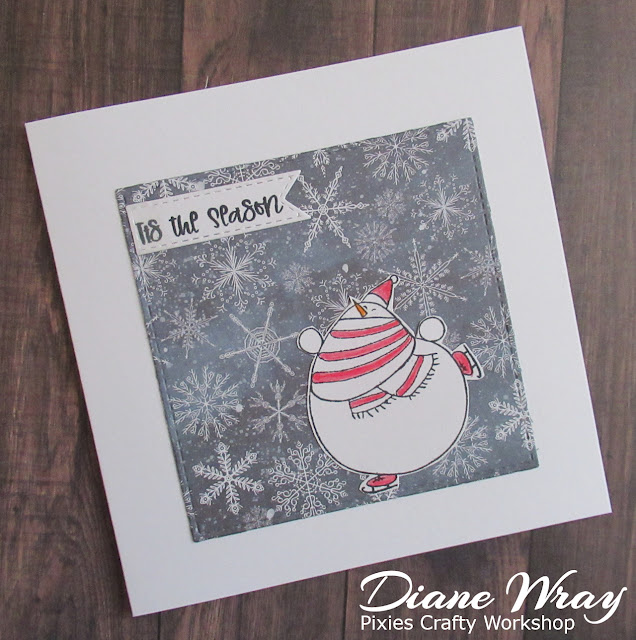 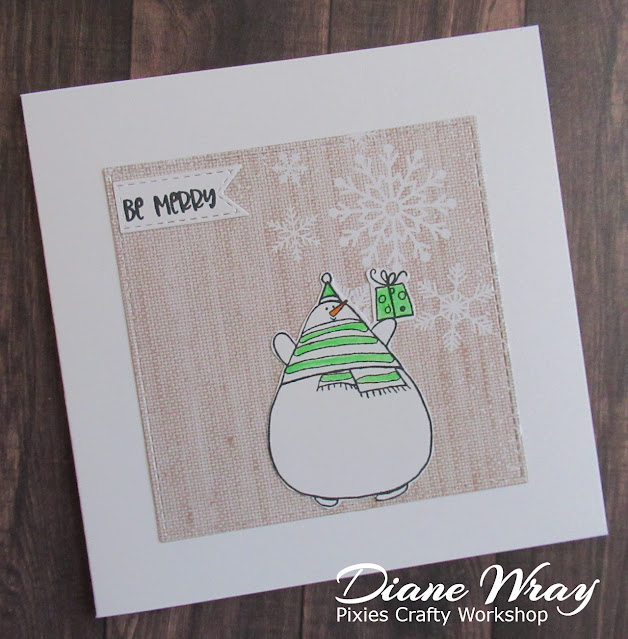 - the snowmen images and sentiments are all from the fabulous Funky Fossil 'Silly Snowmen' set of stamps, which I'm sure I spotted over at Kathy K's blog, as well as possibly elsewhere

- and then, I looked closer at that 'waste of money' Crafters Companion 'Watercolour Christmas' paper pad that I moaned about the other week. All papers are double sided and some, not all, are very decent it turns out (forget the silly die cuts they included - my mission is to somehow use that flipping paper pad!)

- fussy cut the snowmen and set them aside - some of it was really tricky, especially the sledge inside the runners where I ended up using a craft knife as well as my little sharp scissors. A matching die would be amazing for this particular stamp if you want to add it to a patterned background

- die cut the sentiments using dies from the Frantic Stamper 'Stitched Fishtail Banners' set of dies - a tip about these and other similar sentiment dies below this list. Also, the dies are 'solid' so the best way to use them is to die cut a template with the die and then use that to position the resulting aperture over the stamped sentiment then 'nestle' the die itself into the template and die cut once again - a bit of removable tape for both the holding of the template over the stamped sentiment, as well as more to hold the die in place once it's 'nestled', works a treat

- next die cut the selected 'reversed' sheets from the 'Watercolour Christmas' paper pad using a 'Square Stitched' die from The Works here in the UK. They certainly used to do some brilliant dies but you needed to be quick off the mark - another tip below about cutting these

- positioned the snowmen and the sentiments and then stuck them down using a glue pen - all done!

In fairness, these took me a few days to make, just pecking at them here and there in between other fun things going on.

My two extra tips are:

1. I'm sure a lot of you may well have worked this one out, but it's worth repeating if you haven't. I had the correct width/height for the smaller 'one line' sentiments but the overall length was too long in both cases. I die cut the sentiment making sure the beginning of the sentiment was where I wanted it to be in the die. So then I was left with the flag end having too long a gap of plain card. The way around this was to replace the die cut flag in the die, making sure that the 'flag V end' was as close to the sentiment as I wanted it to to be with the excess overlapping the V shaped end of the die, wedged it snuggly into the precut stitched 'slots' - held it all in place with removable tape and then ran it through the die cutting machine a second time to cut off the excess from the V end.

2. If you're die cutting background panels for a couple of identical cards for example, like my square stitched panels, from paper - in particular a patterned one where you want the the alignment to be identical on two cards - then don't be afraid to layer two pieces of paper on top of one another with the patterns lined up of course (using one edge or a similar method) and die cut them both in one go.The worst that can happen on a simple die with a stitched edge is that you may need to run one through the machine again to get the detail, with the die cut nestled back inside the die. I didn't need to do that and the patterned paper is double sided and fairly sturdy. It could be worth experimenting with slightly more detailed dies but I'm really not too sure about that as an idea.

Another six for the box but I'm no longer showing my 'total made' on my sidebar. I know how many I have in my Christmas card Really Useful Box - just on a piece of paper inside the box. The numbers are growing nicely enough for my reduced needs and that makes me happy.

I'd also like to add this into Darnell's NBUS challenge #31, it was a first, but certainly not a last, outing for the really fun Funky Fossil 'Silly Snowmen' stamp set.

Sadly out of stock at the moment if anyone wants to order one, sigh. A real shame they're missing an important trick which is to register your interest and be emailed once they come back into stock. Do they really understand the way the mind of a crafter on a 'must have mission' works?