Hello again! If you live in one of the affected countries, did you remember to change your clocks last night. In the UK we change them at 2am on the last Sunday in October - which technically, when this post appears, is actually still two hours away. For us it's 'Fall back' by an hour.

Anyhow, here's my snippets card for this challenge - and please don't be misled into thinking it points to the prize, as it doesn't: 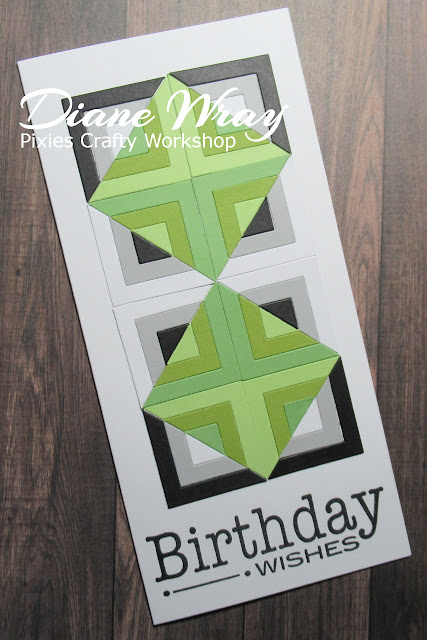 - used a NBUS set of dies from Simon Says Stamp called 'Geometric - Squares' to die cut two 'triple nested squares with a diagonal slice across them which makes them into two triangles per die cut' from each of the colours plus an additional two die cuts from the olive green and the grey (I know, it threw me as well! But the middle colours on the triangles are double in number to the inner and outer shapes). Lost? Don't worry, this is more to remind me in future!

- then die cut eight plain squares using the same set of dies and white card, covered on one side with 'Stick-it adhesive sheet

- taking one triangle at a time I added the coloured die cut pieces - working inward in dark to light on four triangles and light to dark on the other four triangles. First set with green and the other set with black, grey and white

- now I had eight triangles to play with

To my horror' the squares still ran off to one side but I needed to get the card finished for Len to post - just hope his great nephew Ben is more interested in the contents than measuring my 'blooper'!

It was fun trying out a new set of dies (so useful for male cards) and the possibilities are endless - with more time to play. I didn't even have the time  to straighten the panel - just by trimming right round it and then adding it onto a fresh card blank. Loads of different dies to mix and match when time isn't running against you. If you stare at the card, it gives the optical illusion that some green patterned paper has been folded over the monochrome ones - purely because of the white portion of a couple of the squares blending in with the white card front - certainly not an expected result but quite quirky.

So, here's the prize for this challenge: 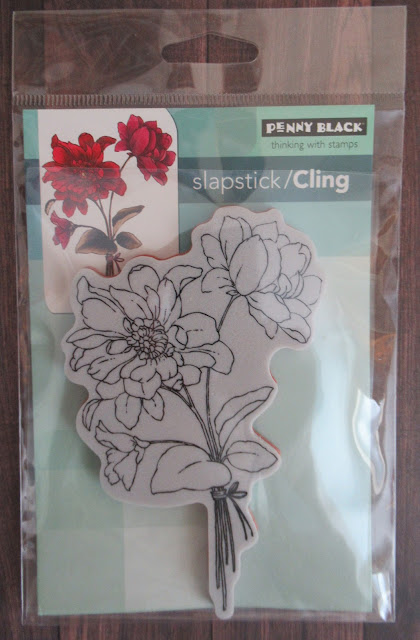 And a close-up of the back of the packet: 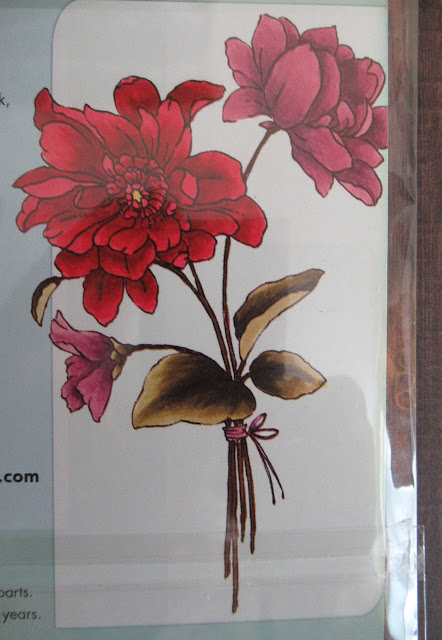 Gorgeous isn't it? It's a Penny Black slapstick/cling stamp called 'full of glee', kindly donated to the toy box by Darnell - thanks so much Darnell for this and all the other lovely prizes you included for us.

I do still have some 'duplicates' of prizes and will be using those to show samples at intervals in the future. But, as they are used up, I'll be switching and my snippets card at the start of a new challenge most likely won't reflect the prize. Prizes will still be new and still every bit as good - but I really have so much of my own unused stuff here that I can't keep on buying duplicates of prizes just to show how they can be used. Running out of storage space here!

As always, the Snippets Challenge will run for two weeks and the Playground gates will close at 11am UK time on Saturday 13th November. The gates will open again at midnight UK time on the same day.

Remember, if you link into the Playground and don't say clearly that you want to be in the draw in a comment on here, then you will be bypassed if your name comes out of Mr Linky. I'm sure you all know I ask for a positive 'yes' on the blog post itself - just in case you're only playing for fun - otherwise I don't add you to my little list.
Please also remember that I only allow a total of nine other challenges, which makes 10 in total, when you enter a snippets make into the Playground.
Finally, a tale about Dudley. When we have a grocery delivery (not been to a supermarket since March 2020) Dudley knows what's going on when Len gets out the large plastic boxes and his rubber gloves (still so careful here) ready to transfer the order. The other day 'Dudders' was 'hyper' and squealing with delight as soon as he saw the boxes appear. It was over an hour before the delivery was due so he had a long wait. Anyhow, the delivery arrived and Dudley kicked off doing his 'yodel', as he usually does. Next thing we knew, he took one of his beloved toys ('Honker Duck' which is like a Mallard and honks rather than squeaks) - from upstairs, raced back down to the front door - and carefully placed it at the delivery guy's feet. The delivery guy was visibly moved and we were both pretty astounded as Dudley has never that to done that with anyone other than us!
Stay safe and be kind.
Lots of love from us all - Dudley and of course me,