Today is Len's Birthday and boy was I stumped for a card idea! I have a few in the 'everyday' box of cards and one of those was perfect from Dudley - but I wanted something he hadn't seen before from me.

Eventually, Vicky's brilliant card that she made HERE popped into my mind and that was the starting point. She used a die set, won in the Snippets Playground, so I took it from there as I've had the same set of dies waiting since May to be used. I would have loved to do a total CASE of her card but that seemed like a step too far, so I came up with this: 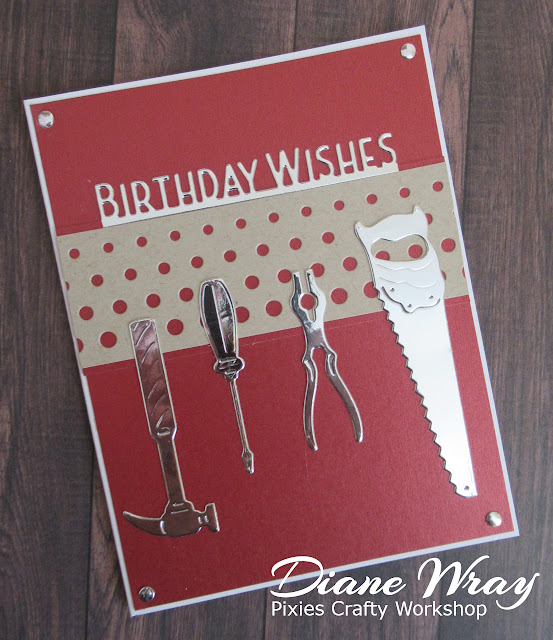 - a snippet of Neenah 'Desert Storm' card, die cut using Poppy Stamps 'Fading Dot Border' die the trimmed to create a sort of 'tool peg holder board' along the top and bottom

- adhered that strip to a strip of the 'Red Vellum' card (which I'd cut in one swoop to the same width as the backing panel) and then trimmed it top and bottom to leave just a small margin. I did this step to allow me to move stuff around rather than adhere the 'peg' board straight onto the red panel

- then die cut a selection of woodworking tools from a snippet of silver mirri card, using the Sweet Dixie 'DIY Tools' set of dies and the Altenew 'Mini Blossom' baby die cutting machine - ready to work out the positioning of the whole card front

- glued the whole front panel to the card front

- glued the sentiment just above the 'peg board' , using a glue pen

It's a super-appropriate card really as one of 'Handyman Len's' Birthday presents is yet another type of electric saw to play with.

I'd like to add this card into Darnell's NBUS Challenge #31 as it was a first outing for the set of DIY Tool dies.