We have glorious sunshine here - Happy Dance around the garden! Long may it last as it's such a lovely sign of what's to come when seeing new shoots sprouting in the garden ....... and no doubt the rhubarb patch will spring into life any time now. Hooray for more rhubarb than we can eat, although this year I plan to pull it often and bake pies, cakes - as well as gently stewed rhubarb instead of apple sauce whenever we have roast pork. We still have a way to go yet with the weather though, so don't be packing those woolly vests away just yet.☺ 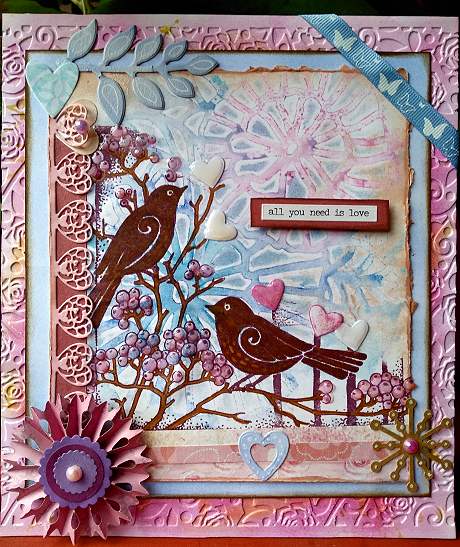 Alice used absolutely loads of snippets for this beautiful card - I love it and there's so much detail, each time I look I spot something else! 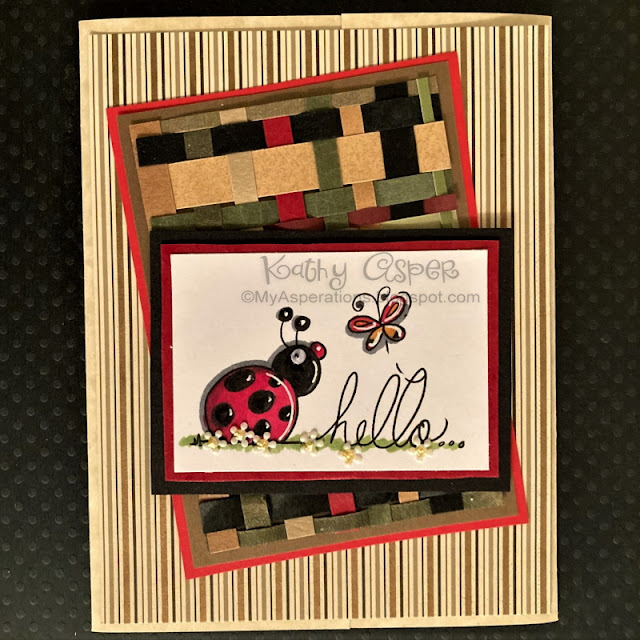 Here's a really clever way to use snippets - make a woven background!  Kathy A brought this lovely card to share - I can't get over the wonderful co-ordination of the papers as well as the colouring. 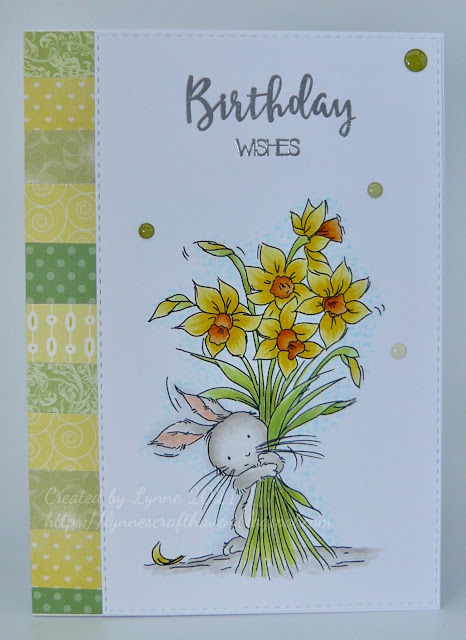 And another way to use up snippets and at the same time 'pull together' the papers and the image itself. Lynne shared this card with us and it's absolutely delightful - what a splash of Spring.
And a fourth pick this week as I just couldn't whittle my short list down to three: 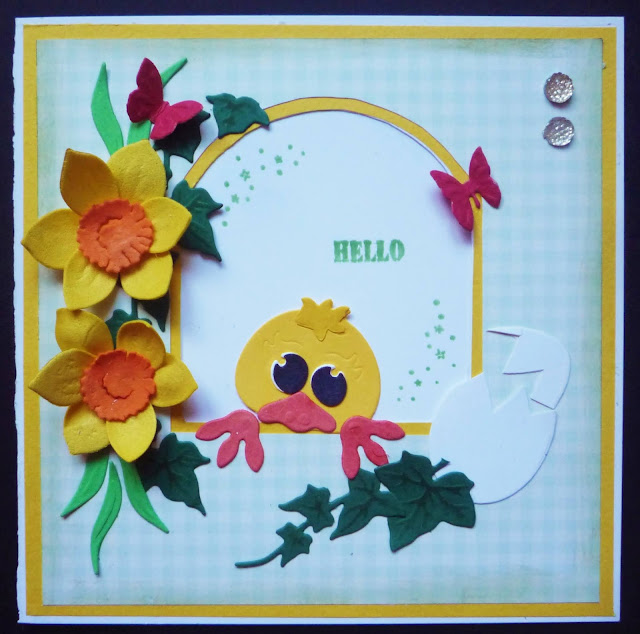 Lia shared this delightful card - so perfect for Spring/Easter! Again. wonderful use of lots of snippets and such a cheerful card. Told you Spring is on the way!
And we had one new Playmate who came and joined in:

Jo is a friend of Ruby's Mum Lynne in NI and it was a lovely surprise when she linked this lovely card in! In return, can I point you in the direction of a great Challenge run by Jo and Gail (Ionabunny) who also plays here. It's fairly new and is called Let's Squash It. It runs monthly from 10th to the end of each month and the idea is to use an embossing folder (hands up who neglects theirs!) along with another theme(s) which vary each time. For example, February's Challenge was a Love themed embossing folder and the colour Red/Pink. Note to self to make more effort to join in this fun challenge.

That's my picks from Challenge 396 in the Playground, we had 49 entries and one new Playmate.

Now for the prize draw, which is a Poppystamps 'Mushrooms and Toadstools' set of dies - kindly donated by Connie - plus a set of LOTV Easter Bunny toppers as well as some silver Easter/Spring sentiment peel offs, kindly donated by Kath B And the winner is:

Congratulations Marjeta! I'm super-delighted that your name popped straight out when I ran the Random Number gizmo - as far as I can tell, you first played in January 2017 and although you've had a Gold Star and also been a Playground Pick at least once, in four plus years this is your very first Playground prize win!

Remember folks, there's still almost one more week to run on the current Challenge 397 HERE. The prize is an Indigo Blu 'Flower Heads - A5' set of stamps.

A little more time during this past week has been spent by Len, doing more trimming of Dudley - right now his little legs look a bit like matchsticks giving him the look of a little barrel-shaped cartoon dog on skinny legs (think of Gnasher in the Beano comic, but without the bared teeth and evil look!). So now his torso needs taking down to a lower level of cut as basically he still has too much fluffiness around his body. I have rolled my eyes and asked why Len doesn't just shave him bald and then he can begin growing again from scratch! This is going to be a bit like painting the Forth Road Bridge if we're not careful. He's so patient and will play nicely at being good for about an hour at a time, then he lets you know he's had enough by just flopping down flat and resting his head on his front paws. Almost there - and nope, I doubt if I'll be posting any photos of him just yet. Still, at least no-one has fallen about laughing and pointing at him when he's out for 'walkies'! And, he looks a darned sight better than he did when that dreadful groomer couldn't cope with him properly a year ago.

Dudley is such an inquisitive little chap - and it's not just when I'm cooking either. He can hear the rustle of a cheese wrapper from the other end of the house or garden and comes running into the kitchen on the offchance of a little nibble. And he's so comical when post or parcels are being opened - he always has to be shown the contents and then he gives it one single dab of his nose - which presumably means it's been stamped as 'approved'!

His latest trick (Dudley not Len) is the discovery of a small gap in next door's fence - low down where the boards meet the bottom cross piece. He will crouch for ages peeking through into next door's garden in the hope of seeing their dogs. They have Teddy the Shih Tzu and now a little girl puppy Shih Tzu called Tinkerbelle. Talk about a peeping tom! His very best friend is a dear little dog called Arnie - they live over the way from us and we just need to say 'Where's Arnie' and he's rushes around the house looking for him! Never a dull moment.

This challenge #396 was our first one in memory of dear Ruby, beloved Westie of our lovely playmate Lynne in NI. Ruby, who was originally rescued from a life of misery and 'puppy farming' by USPCA in Northern Ireland, was then adopted by Lynne and Greg and what a wonderful time they had together until just before Christmas 2020.

So that some good can come out of the sadness, I pledged to send USPCA a donation in lieu of what I would have spent on a prize for each Ruby's challenge we run (hopefully every six weeks until we run out of prizes - we actually have loads which is so heart warming, what a lovely lot you are!).

As I type this, late on Saturday afternoon, their website is kicking me out - I'm trying to donate but it isn't playing ball, right at the point of final verification. I've raised a query with them and will keep you up to date. Sigh. Otherwise it will be The Dogs Trust or similar - but I really want us to help the charity actually which rescued Ruby. Watch this space.

Love from Parsnip, myself and the usual happy 'high-five' and woof from Dudley.