It seems quite a while since May's Rudolph Days challenge - run by the lovely ScrappyMo HERE. I like the monthly prompt to add to my stock of Christmas cards, and this time round managed to make seven cards for the June challenge, all the same: 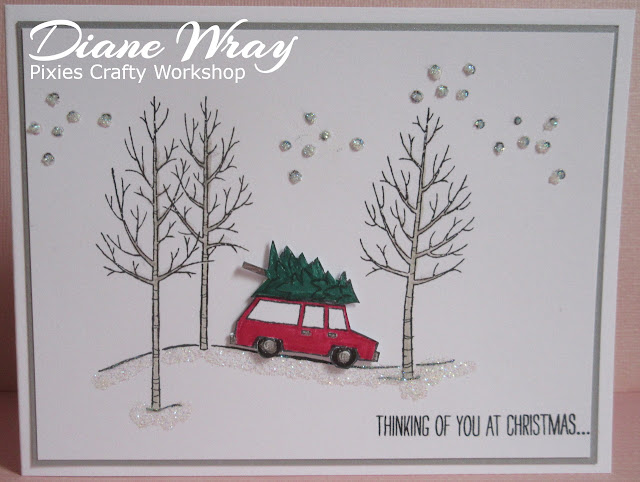 - a piece of slightly shimmery silvery grey card, trimmed to an eight of an inch smaller than the card front, all round (ie. 5.25 x 4") for the backing to frame the finished image panel

- white card onto which I stamped the tree background and falling snow from the Stampin' Up 'White Christmas' set of stamps, using Memento 'Tuxedo Black' ink

- then added the sentiment, also from the same set of stamps, trimmed the image panel down to just slightly smaller than the silvery grey layer as I wanted just a narrow silver grey frame and set the panel aside for now

-  next stamped the car and added the tree on top onto slightly thinner card as I was going to fussy cut them after colouring - thank goodness for the Misti, brilliant for 'batch baking' a load of cards all the same

- coloured the car with the tree on top using my much loved Whispers brush markers and then spent what seemed like a lifetime carefully fussy cutting seven of the little perishers! Why seven? Ah - that would be telling (basically there was a casualty when stamping the tree background which I couldn't save early on in the process - not even using the Sand Eraser)

Despite almost losing the will to live with the fussy cutting, it was good fun making these cards and it also boosted my 'tally' to 43, wahoo!

I'd been hankering for this set of stamps for a while (I think they first came out in 2014) and was lucky enough to find a totally new set on a Facebook De-cluttering site a while back. Plus, they're clear polymer which, in combination with the Misti, did take a lot of the 'angst' away from the stamping process when building up the scene for the background and the tree on top of the car so it could all be cut in one piece.

We have a neighbour with a very similar car - but perhaps the sentiment isn't right for folk you see more often than some :)

I saw a few very similar designs on the Internet using this stamp set - the one I followed is by a SU demonstrator but I can't find it again, sigh. But, thank you - whoever you are :) One thing I would change - I would not add the glitter blobs to the falling snow, better to have left them well alone and she did. AND, that car has no driver!!