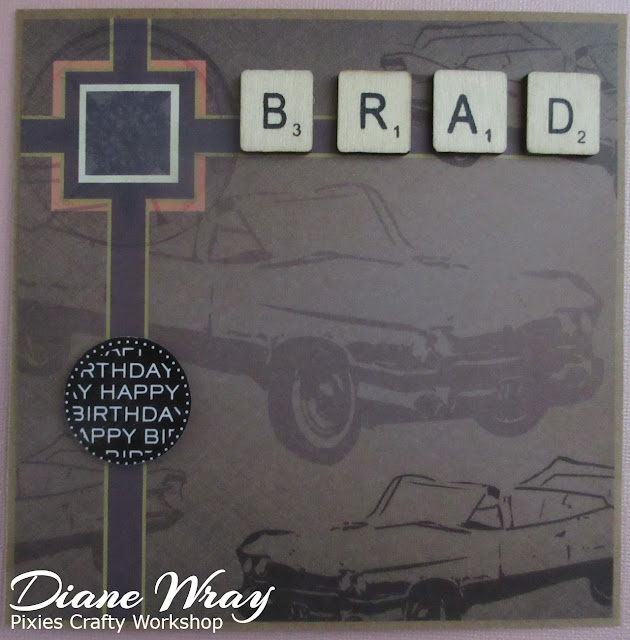 Well done Di! Cards for young men are the toughest to make, especially if you don't really know what his interests are. Not all guys are into sports! Of course, even knowing what the recipient is interested in doesn't help much if you don't have supplies that apply. I had to resort to downloading clip-art of a game controller and coloring it in..then adding hand-drawn details...for a video game fanatic once. Those scrabble tiles add wonderful dimension and personalization. I know he'll feel very special when he opens it up. A bonus point for using up old, old stash too.

Oh what a great masculine card, Di! Love the Scrabble pieces, design & car paper! So glad you're seeing some improvement & hope Mr Dudley isn't getting into too much mischief!

Thinking of something for a male card - especially if they are in the younger age bracket - can be difficult but you've certainly come up trumps here. Pleased the really useful boxes actually contained something useful for you, often mine don't even though they are full!!

A lovely card and a great idea to use the scrabble pieces - glad I'm not the only one who struggles with male cards!
Kath x

Brilliant card Di...I have several really useful boxes with stuff in that I had forgotten about and then find after I need them! Yours proved a really useful box...it all co-ordinates together so well. Still raining here...must bring wellies to playground to splash in the puddles! Hugs xx

That's a terrific masculine card . . . and personalised too. Just the ticket. Very difficult age to make for!

What a wonderful card for a 20 yr old, and fabulously masculine too, Di!
Blessings
Maxine

This is fab, Di xoxo

I love that these are thin Scrabble pieces. A great idea for his card. I wish we had some of those thin pieces. All I've ever seen are the thick and those wouldn't mail too well.   [Bunny]`

This is a wonderful masculine card Di and I love the tiles with his name on which work so well, and it goes to show that even when you puzzle over a theme it can evolve into a super card and perfect for a 20 year old. x

A fantastic card Di, I love the name in scrabble letters.

I’m sure the younger generation are adding 5 yrs to their ages each yr whilst we are busy substracting. Great card using the scrabble pieces. Erm how you going to play the game now though!! Hugs Mrs A.

Wow!!! Len's great-nephew will be amazed! You made him a fabulous Birthday card!! Such great masculine design! Any detail looks just perfect !!

Fab card, Di. I find cards for men so difficult and usually find I'm totally without inspiration too. The Scrabble letters and the greeting are perfect, as is the paper - I can well imagine the cars would appeal to a 20 year old. Hugs, Elizabeth xx

What an absolutely cool card! Love the scrabble pieces - what a find in your boxes. Love it! Hugs my friend xxxxxxxx