Here's another prize in the 'Snippets Playground Celebration' prize draw- and I've also posted these cards on the blog already - but here it is again with a reminder about how I made them:

- piece of gold mirri card, about quarter of an inch smaller than the card front - glued in place using Collall All Purpose glue

- snippet of the same off-white card as the card blank

- backed the image panel with a slightly bigger piece of gold mirri card and then glued it onto the card front - done! 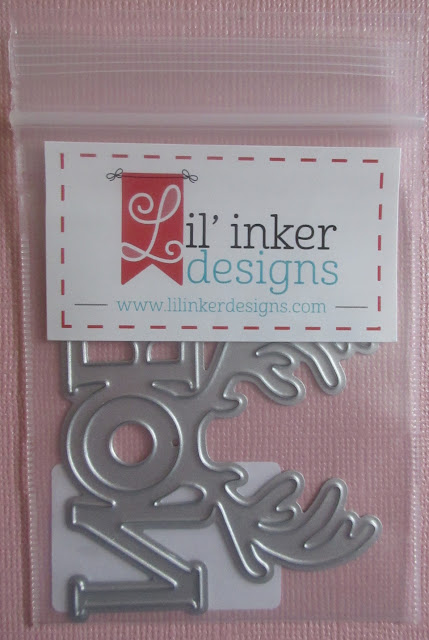 A Lil' Inkers die called 'Noel Word Antlers' - times three! So you have three chances to win this lovely die as there are three lined up waiting for new homes.

Just leave a comment on this post if you would like the chance to win today's prize. The post I did on Sunday 23rd December has all the detail you might want to know about this bumper draw and how it works.

Hope you're having a quiet time after all the festivities - I love the days right after Christmas - cold poultry cuts, left over pigs in blankets stuffing, bubble and squeak using up brussel sprouts and leftover roast and croquette potatoes chopped - yummy. And gammon cooked in Coca Cola, the best!

Remember to keep on checking - there's more to come yet, wink, wink.I've just realised that so far we've had a lot of dies as prizes - the next prize is at least stamps with matching dies for the stampers and colourers among you!

I love these cards. I'm sure it's probably only me, but when I look at that die it looks like the deer could be walking away from you and that you could make the hose a white tail instead. That could be the amount of sugar I've consumed in the past 2 days, too. Either way it's cute and

I remember seeing these cards when you first posted them on your blog. I just love this die and the plaid background is perfect. I'm a Yes Please for this prize. xx

Yes please to this fun die! I love your plaid versions of the card and remember when you featured them on an earlier post.

Loved your cards when I first saw them, so can't resist being included in this draw, too! Happy New Year, Di!

great die cut image, love the antler Noel and the plaid background. thanks for the reminder of such fun cards. yes I'd love to be the owner of one of these dies :)

Phew, I'm home form my Christmas trip now and hopefully (once the fridge has been refilled and the laundry mountain tackled) ready to get crafting again. I'll be playing along soon and would love my snippety card to go into the hat for one of these fab dies.

The plaid paper matches so well the fun diecut, they make the cards more elegant and suitable for everyone.
Yes also for this prize, thank you :)

I have seen this die before and I like it very much. You made a great card with it and I say Yes to it!
Lia xx

Yes please Di, I think these cards are great for batch making!

Yes please Di - I think this die is such a fun one! I thought the cards were wonderful the first time you showed them, and still do!
Blessings
Maxine

Love this die and your cards. Would love to be in with a chance to win this one. Love Nicky

I love this die and it would be great for making flat cards. I will be a yes please for this, thank you x

You've used this die to really great effect with the tartan background - tempted again so its a 'yes please'.

I am about to do a Highland Fling... well maybe not....
Tartan paper always makes me want to ask the eternal question about kilts and underwear but we shall save that for another time I think!

This is a smashing looking die so yes please for going into the pot for this prize. TGCIO. Hugs Me.

I loved these cards when you first posted them. Yes please to enter the draw, thank you!
Janice x

P.s. Thought it was just my Mr Linky playing up as I can see a sprinkling of half of my thumb nails on my current challenge. Hugs Me.

Super cute cards! I love the plaid paper and adorable deer die-cut! (Please don't include me for this prize as I already have something similar.)

Well, I must have missed these cards the first time you posted them. This is a really fun die, and I have a feeling those lovely plaids are the perfect choice to use with this die.
Please put me in the drawing.

Yes, please. It is such a fun die. I agree with Bunny that you could use the center circle as a tail. How clever that would be.Thanks for the chance to win.

I remember seeing these cards and put the die on my 'wish list' so would love a chance to win, please.
Kath x

Yes to Prize E. what fun masculine Christmas cards. Would really love that die! I am really enjoying hearing about what an English holiday is like at your house. Hi to Dudley.

Gorgeous cards and 'yes please' to the chance of winning this fun die! Thank you. I love leftovers too. Yummy! Hugs xxxxxxxx

No Christmas leftovers here as we ate out and I've not seen a single sprout anywhere! 7am and lying on bed with the fan on trying to cool down..... and it's supposed to get even hotter!

Loved these cards when you first showed them, it's a super die and looks so good with the plaid papers. It's very tempting so a yes please from me xx

great cards, I love the background and this die is very special.
yes, please for the prize.
hugs xx

Awww, so cute. Hmm leftovers!!! I am giving up and the chickens will be happy to get some extras LOL. Yes please include me in the draw for this fun die. Hugz

Yes please! This is a very cute die cute! Very clever! Please consider me for the prizes.

So simple, but so sweet and adorable Di!
Yes please to the chance of winning this fun die! Thank you.
Hugs, Majda

I remember the first posting of these great cards, and I love the red and green plaid patterns to show off those fun antler dies! It's definitely a yes please for me for prize E, and thanks!

Great cards! Yes please, Di. You are right, the days after Christmas and the food are the best! Except that I am struggling with my jeans today...xx

Hi Di this is a gorgeous pair of cards I love them both. That die is wonderful so it is a yes please from me. Take care. Hugs Jackie

Great cards. Just love this fun die. I would love be in the draw, please.
Valerija xx

Love how you gave the deer a nose! Fab papers too...reminds me that I have some tartan papers lurking somewhere...
I'm a 'yes please' for this one.
Helen x

Oh.. great die. So yes please to the prize. [And I love Bunny's idea for creatively using it in her comment. So fun.]

Such gorgeous cards! I absolutely love all things plaid! Yes please for the prize.

Yes please include me in. Thanks, CarolG

Brilliant cards, Di, and a fabulous die. It's a no brainer - it has to be another 'yes, please' from me. I'm a sucker for anything with a stag on it :) Hugs, Elizabeth xx

Ok, this is just too cute!! I haven't jumped in on many of the prizes, but I've got to answer "yes, please" to this one.

That die is so fun! Wonderful cards. Yes please to the prize.

Love the simple yet elegant homespun feel of your cards...great masculine look for Christmas. Yes, please...I would love to add this prize to my Christmas dies! Thank you so much for the chance to win so many awesome prizes!!!
<3 J