I know, I'm a right pain driving up the tally of Christmas cards I've made this year - am so close to the target I set myself that Little Miss Stubborn doesn't want to give up just yet.

I made six cards, all exactly the same last week, during those miserable rainy days we had - I can see little fuzzy bits around the die cut sentiment in the slightly wonky photo, but it's so hard to grab any daylight just now that I had to settle for the best I could manage. Have just whisked those fuzzy bits away with a fairly stiff paintbrush: 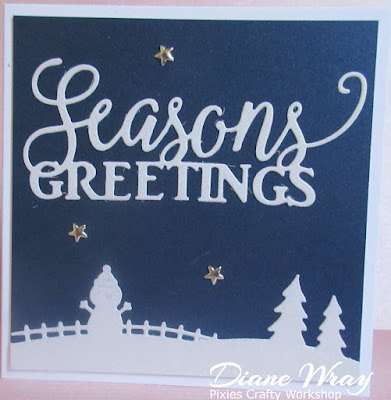 I'm really happy the way the border along the bottom breaks up a plain card and the fabulous big die cut sentiment works well with it rather than being on its own (IMHO).

I think this may be the last year I make cards for quite a few people though. Obviously crafting friends will always receive hand made cards, as will family and close friends. But, it's becoming more of a chore than a pleasure given the number of cards we send and receive - especially as Dudley does need quite a lot of attention. Plus, a few friends are going 'electronic' and some others even use free sample Christmas cards they've been sent by charities. I know it's the thought but this gal is gonna start thinking a bit more about priorities!

Took Dudley out for his first solo drive with me yesterday just to our local dentist to deliver a Wedding card and then straight back home. He was wearing his little 'walkies' harness and hooked up to the seat belt slot on the front passenger seat beside me. Did you know that Havanese can almost 'yodel' when stressed? In between heavy panting - poor little sausage! Was it my driving I wonder? However, he's back to his normal naughty self again!

Lovely card, and you have six of them just ready! to be sent I'm later, instead... times doesn't help me :(
Dudley certainly need all your time, now. I don't think was your driving to make him "yodel" :) Perhaps he has thought to a vet visit ;)
Thanks for having make me know about the monkey's toy faux eyes, they seemed buttons to me... and I know how puppies love eating anything!! LOL
Hugs

Yes Alice, those eyes are very realistic due to the bit of white cotton on the black eye. Dudley is always fine going to the vet but previously Len would have sat in the passenger seat with him in a little puppy carrier. He's just a bit too bit to fit in to that now. Perhaps he missed his Dad? Grin.

What a stunning card Di - I hear you when it comes to making and sending cards - I mass produce so I know that everyone gets the same card and I don't have to worry about who got what the following year! It can also speed up the production somewhat
Blessings
Maxine

I know what you mean about re-thinking the handmade cards that you send at Christmas because I've been getting fewer and fewer actual physical cards, and more e-cards. None of my relatives make cards, and most of my friends don't either but I just can't bring myself to buy any at the store when I have so much stash. I still have a few boxes of store-bought cards that are left over from when we sent them out to business customers so will send those out to the folk that don't know the difference ..haha!
So, you mean you're going to describe Dudley in his harness and seat belt and not show us a photo? Our Toby wear a harness in the car, which hooks up to the seat belt as well. It's called an EZ-Rider..which always makes me laugh.

Oh, I almost forgot to comment about your beautiful card Di..my brain is only at half speed tonight! What a helpful tip about using your Cuttlebug and embossing plates to make sure that die cut seats in perfectly. I use a glue pen with a fine tip for intricate dies, and the edges often seem to lift up just a bit even when I'm careful. I'll be sure to run them through my Big Shot next time.
Those star-shaped nailheads are the perfect bit to sparkly against the navy!

This card is quite striking and well done for making them in quantity. I admire people who can mass produce but am not a fan of that myself.

Well, as long as he's yodelling IN TUNE! Were you singing along with him? LOL!

No matter whether the card is physical or digital, you have STILL thought about the recipient. I'm using a mix of e-cards, handmade cards and shop-bought charity cards for the first time in YEARS. Decided to give myself a break from the rigours of making EVERY Xmas card needed this year!

Fabulous cards Di. I pruned my Christmas card list last year, but still make all the ones I send although a lot of them are flat for cheaper posting!

Dudley sounds such fun - I bet you'll have a fabulous Christmas with him and all that wrapping paper as well as a Christmas tree!

Aww a drive out for Dudley l don't think it would of been your driving Di maybe he was just a little unsettled as he wasn't used to being in the car but l'm sure another drive with him will sort that and then he'll be wanting to be driven more and more he's so cute, l feel the same about the card's l still don't have much mojo at the moment l thought l'd done all my cards for this year but after getting my list l find myself doing more during this bad weather we are having and l still need to do more but hopefully 2019 will bring the pleasure of crafting back take care enjoy your day xx

A lovely card Di. I have to confess to using some bought ones and some if the free charity ones( well it seems a shame to throw them away) for people who I’m fairly certain equate hand made with cheap!

Hi Di this is a stunning card design I love it. Yes it is very dark and grey at the moment. It is hard to get photos. Take care. Hugs Jackie

Fab card Di.
Am with you on the handmade front - I have only sent handmade to my crafty friends and other (very) close friends this year. Although I enjoy making, I don't want to get myself in a state trying to do millions of Christmas cards! That said, I have some left over for next year now from this years makes - and as the craftie space is STILL in a mess, might make some more under no pressure! x

I am totally with you on that one Di, I cut a few out last year and have also done another few this year, I know it is the season of goodwill but there are those that you never hear from, from one year to another and they are usually from when we were very young or a lot younger than we are now.
Really lovely card, great scene and dies.

Stunning card, Di, so striking in white with the dark blue. I know what you mean about thinking about who to make cards for. I was a few short when I wrote mine out yesterday, so I made another batch of a dozen today. I do wonder how many will land up in the bin by January 1st though. I'm thinking I might actually buy some next year. xx

Hi Kath! I have a system where I keep track of cards sent and received in those 5 years at a time pre-printed books/organisers for Christmas . So, for me it's two shouts and you're out - ie. two Christmasses running and you get struck off the list if you ignore our card as I sort of get the message by then. But, we still send to people who were distant friends about 30 years ago! One year I'll be brave and wait until the very last minute to write our cards and then only to those who already sent theirs to us and I bet the list will go down hugely! x

This is a beautiful silhouette card Di and love the blue and white and the JR star shaped nail heads look great. I have made some cards which I send to close friends and family and the others will be bought cards as with everything else going on time is running out and I have decided I am not going to stress about it. x

Beautiful card Di, I love the simplicity of this and the dark blue and white combo is fab. I've cut down on the amount of hand made cards I make ... family always get, I make 'mini' CAS cards for workmates and then only my 'nice' neighbours get one. Everyone else gets shop-bought, I couldnt go down the electronic route though!

Stylish cards. Thank you for the amazing prize from your last Snippets challenge. Lots of fun to be had. Emmax

Your card is absolutely beautiful! I have always liked the Swiss dot embossing folder and the gold is beautiful in this design! I have entered a card in the challenge please consider me for the prize. Happy holidays!