Oh boy, it's been so wet here this past week - but Dudley doesn't mind the rain too much thankfully. And, he's even finding the vigorous towel 'drying off session' when we get back indoors to be fun as well. At first the little tinker was growling but we've moved on from that stage and he revels in it, just wait until the Puppy Pampering Spa session lined up for Friday! I have to go away and leave him for an hour and although the girls seem really lovely it's the first time he'll be in the hands of strangers without either Len or myself being there. Gulp.

Anyhow, let's get straight on with the fortnightly picks.

The challenge coincided with the 100th Anniversary since Armistice Day which ended the First World War - and not surprisingly we had a few entries using the Memory Box 'Prim Poppy die. In quite different ways though - here they are as a reminder: 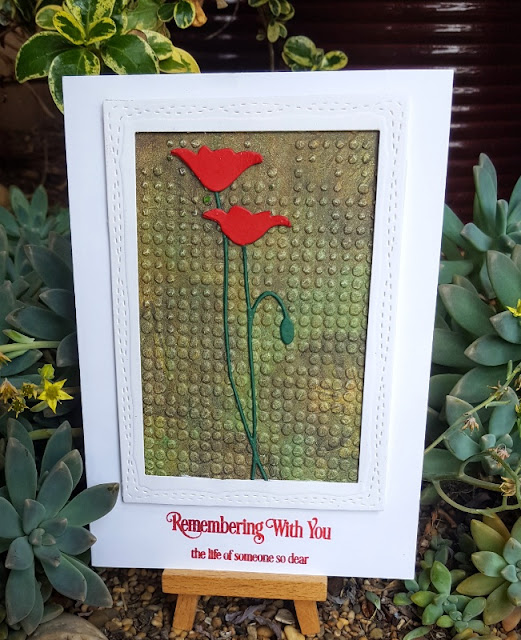 Shaz in Oz made this beautiful card - what a lovely background as well, such an unusual embossing folder. 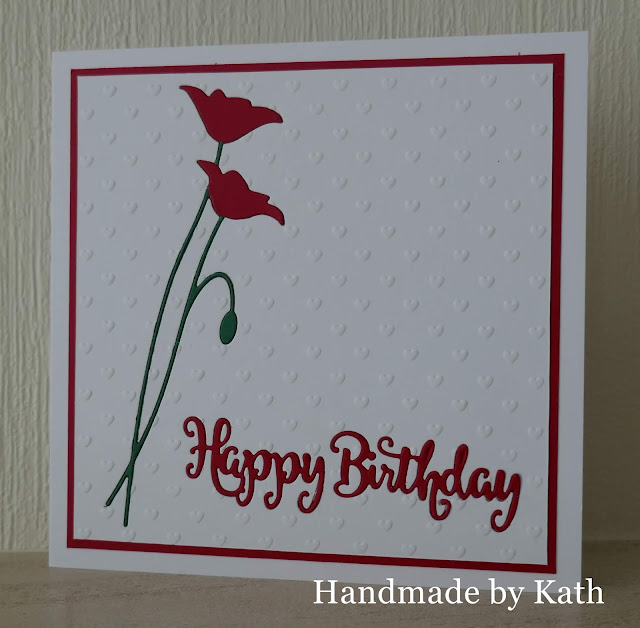 Kath B inlaid her die cuts on this card and came up with a great way to insert those little white cut out pieces - I always manage to lose one or two along the way despite keeping them in a little plastic lid whilst working. 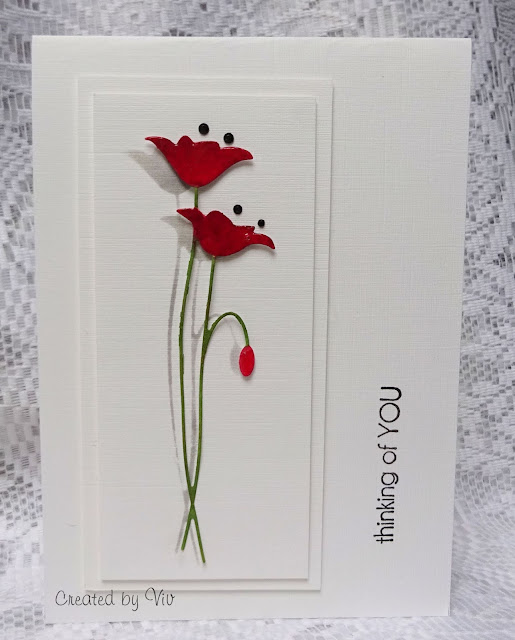 Viv used the same poppy die to create her lovely card - I just love the shadow effect. To find out how Viv did it hop on over to her blog - very clever and one to try out for sure.

Still on the theme of poppies, here's a different die set: 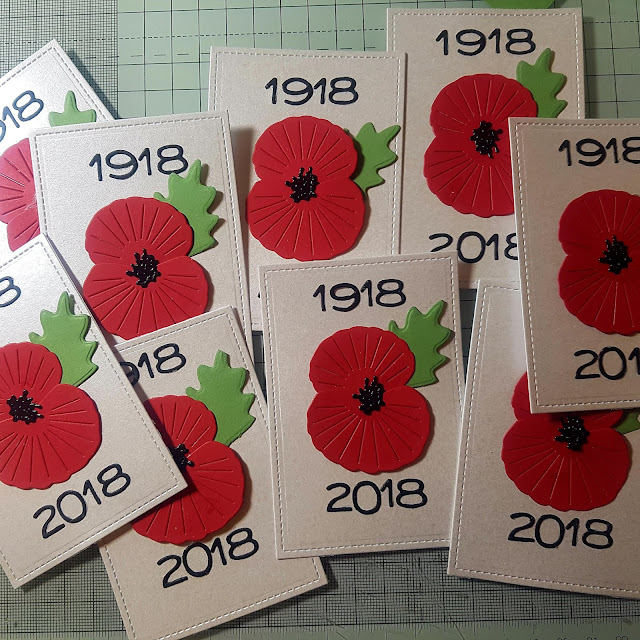 Linby made a beautiful batch of poppy ATCs and very kindly sent one to me - they're even lovelier in real life. I have my Dad's military medals from his Army career, they're in a big. flat, padded wooden cigar box along with matching 'miniatures' for dress occasions. My Grandad's World War One medals are in there as well (Pip, Squeak and Wilfred). I intend to pop the ATC in the box with the medals as it seems absolutely the right place to keep a special momento of the recent anniversary. Thank you again Lynn!

I'd love to add more picks but am short of time - as always now. It's a struggle getting round to Playgroun entries but I am picking away at it when there's time! And of course am also trying to make a few cards to showcase our Christmas/New Year Draw prize. All in between the usual pre-Christmas preparations

No new Playmates this time but again we had a total of 51 entries. We do keep bobbing around that total - which is heartening. I've said before that I have a number in mind and if we drop below it then the Playground gates will close - but we have some way to go yet!

Now it's prize draw time, and our winner of the Stamping Bella 'Straight Up Floral' set of stamps and the Impression Obsession 'Thoughts' die is:

Emma T
Well done Emma - I'm sure this is a first win for you. And it's a double whammy this time as you're also one of my picks!

Do please send me your address, with full name at the top as well so I can copy and paste or just write straight from the email onto the envelope - for speed and ease. It's also confirmation that you still would like the prize of course and I'll post your prize once I hear from you. Please put Playground Winner or similar in the subject line of your email in case it drops into my junk mail. Email address is on RH sidebar as always.

Remember folks, there's still almost another week to run on Challenge #340 - just check back a bit and you'll easily find it. The prize is a Stamping Bella 'sweaty chicks' set of stamps - really cute and amusing too.

And speaking of cute and amusing, Dudley has a new special place where he likes to lie - on a little faux sheepskin doggy mat - on a table right beside Len's desk where he can keep an eye on him! Not sure who's watching who though. Havanese are known to be climbers who love to lie or sit in high places - he loves to do a tightrope walk along the back of one of the sofas here, under strict supervision as it's a long way for a little pup to fall! 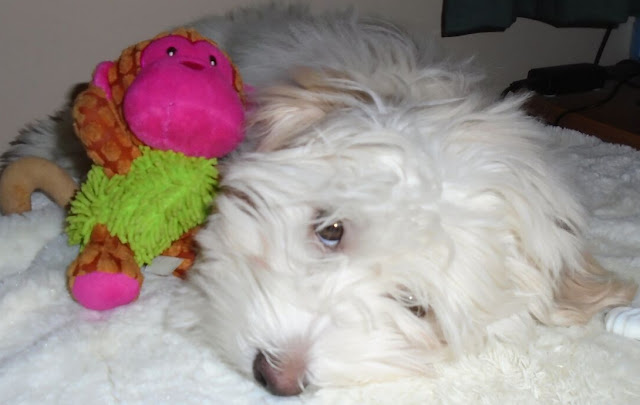 Just look at those big brown eyes - he's a real heart breaker when he gazes at you! Right now he's lying in a doggy bed in my craft room doorway with his head hanging over the side, fast asleep.

The brightly coloured monkey arrived here with him from the lovely Cherie who owns his parents, along with a paw printed fleecy blanket and a little tennis ball. Monkey is his really beloved toy he always goes to when it's time for a nap and it's never far away from him, often dangling from Dudley's mouth by the tail - I've had to repair it once so now Monkey looks like he's had plastic surgery on his chin!He would be devastated if anything happened to Monkey - so needless to say I tracked down and bought a standby one which is hidden away just in case it's needed at some point. Of course it won't have that 'puppy whiff' from being chewed but better than nothing I hope.

Edit after seeing Scrapamondo's concerned comment: Monkey's eyes are just embroidered with a little bit of black and white thread although they might look shiny in the photo they are not plastic, just very realistic embroidery. And I check all of Dudleys toys over daily - plus he only has dog friendly toys with no parts that can be chewed off. But thanks for your concern Alice x

Hope you all have a lovely week ahead, and little Parsnip sends his love. He's been surfing the internet today for more Christmas presents for Dudley - I'm just a bit worried about the miniature saddle as I think Parsnip has ideas about being 'Bear John Wayne! - and Dudley sends his love too! Woof!